After a long day exploring Island in the Sky, we took a day to rest.. which means we only went on two hikes instead of as many as we could fit in from sunup to sundown.

Corona Arch is the arch that first piqued my interest in Arches National Park and what I envisioned with our impending visit.  I thank YouTube, and specifically Lindsey Stirling, whose video not only made me fall in love with her music but also led me to her videographer’s channel.  It was there that I first saw Devin Graham’s crazy video of folks swinging through Corona Arch.  Yikes!  I remember being shocked they’d allow that in the park.  Imagine my surprise when I discovered the one arch most drawing me to this incredible national park didn’t even lie within the park.

On our leisurely day off, we opted for a drive down the Colorado River (of which we had hiked past the the glaciers that started it several days prior) to seek out this arch.  Would any of us be daring enough to swing through it?

Like everything else, the trail wasn’t quite as I expected.  The arch doesn’t simply sit right off the side of the road; those who wish to see it must make the trek.  This, of course, wasn’t a problem for us, as that typically means fewer people.

The arch is about 1.5mi from the tail head off of the highway, and it’s all slickrock and cairns to get there.  A fair portion of the elevation is gained right at the start with a series of switchbacks, before crossing the railroad tracks and heading into the canyon.  Aaron was absolutely thrilled to see an extraterrestrial petroglyph. 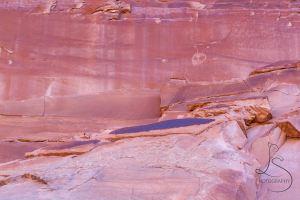 Shortly thereafter, we came to one of our favorite parts of the trail.

Hikers have their own quirky sense of humor.  As a proud geek/nerd myself, I am well acquainted with these eccentricities, and it just makes me feel all that much closer to home.

In this case, it was cairns.  Little piles of rocks in every nook of a rock wall.  The inherent need to add just one more rock atop an already precarious tower.  The collection of mini-cairns – they were so adorably tiny! 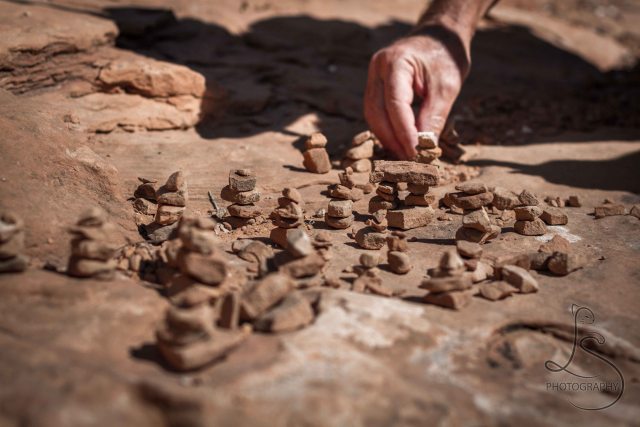 And then there was the massive garden of cairns.

There were dozens of these towers, as though they had all traveled near and far, abandoning their trails to congregate at their own social gathering to discuss the next earthquake.  There were towers large and small, and several were even shaped into the very arch they foretold.  I had too much fun at this spot.

Next, it was time to ascend once more.  Using footholds in the rock and a wire cable for stability, our hike suddenly turned into a bouldering session.  Our destination came into full view, and we arrived at a small ladder overseen by a sentinel bonsai. 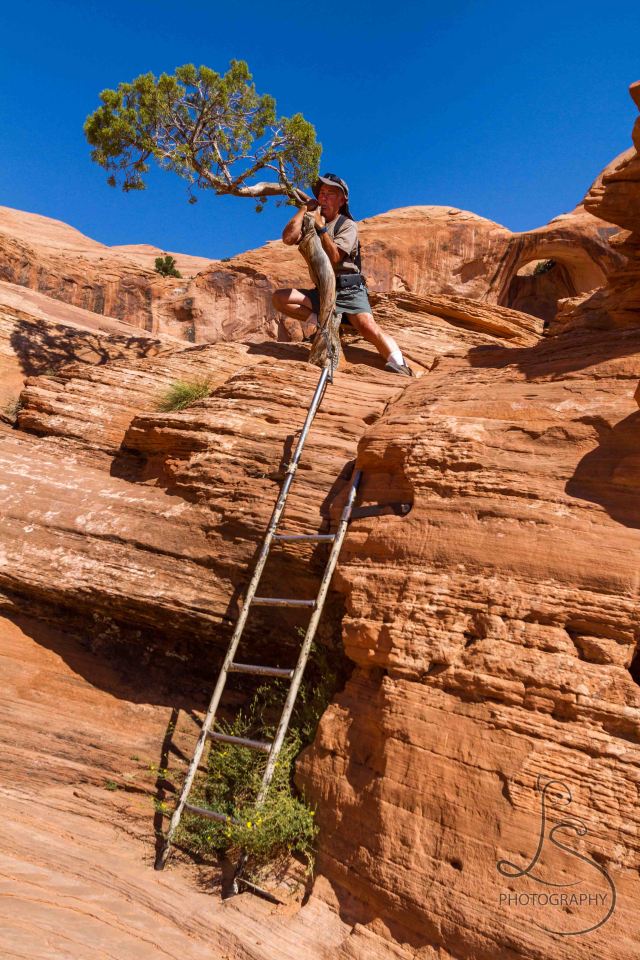 The sheer mass of these canyon walls can’t be overstated.  It is humbling to be in such a magnificent place.  Dad just saw it as another opportunity to test the rock’s echoes.

We only saw about a dozen people on the trail, and by the time we reached the arch, we pretty much had the place to ourselves.

We didn’t see anyone swinging; there weren’t any ropes laying around for someone to do something stupid, and that’s just as well.  We marveled at the geology while we had a quick snack in the shade, and Aaron found another alien in the rocks.

Bowtie Arch was certainly worth stopping by on our way back out.  We had more fun with echoes while admiring this natural skylight, and I was once more amazed at nature’s ability to support life in this desolate rock with the help only of a dribble of a seep spring.

Having had our appetizers to whet our appetite for the main park the following day, we made our way back to Moab.  We used the warm sunny afternoon as an opportunity to return to see out the end of our secret Moab hike before calling it a day.  We had to be sure to get plenty of rest, as we had a long day in Arches ahead of us.

I haven’t stopped blogging.. the adventures are just somewhere else!  Come see what we’re up to on our 14-month trip around the globe!