A friend told us we could easily hit Arches National Park in a single day.  We ended up dedicating the better part of three to the one park – and I don’t regret a moment of it.

After an unsuccessful attempt at sunrise at North Window, we went exploring, as we are wont to do.  It began with actually taking in the arch that I had hoped would come aglow once the sun rose.  North Window has a natural slope that brings visitors right to the threshold of the opening.  South Window is more elevated, and you’d need some more serious climbing to stand within it (though I wouldn’t put it past Dad if he really wanted to).  Together, they make “The Spectacles,” and I can totally see the face.

Next, we wandered over to Turret Arch.  This gave us a few more rock climbing opportunities, and Dad had to find the tallest point and find his way on top of it.

With the sun well up in the sky, it was time for a morning hike.  We set out along a trail that looped around South Window, and it wasn’t long before we wandered off-trail to explore some of the rock formations.

I was pleased to get away from all of the people, and we found a few scraggly trees – dry and deformed – somehow surviving in the harsh desert, much like the ones we saw in Canyonlands. 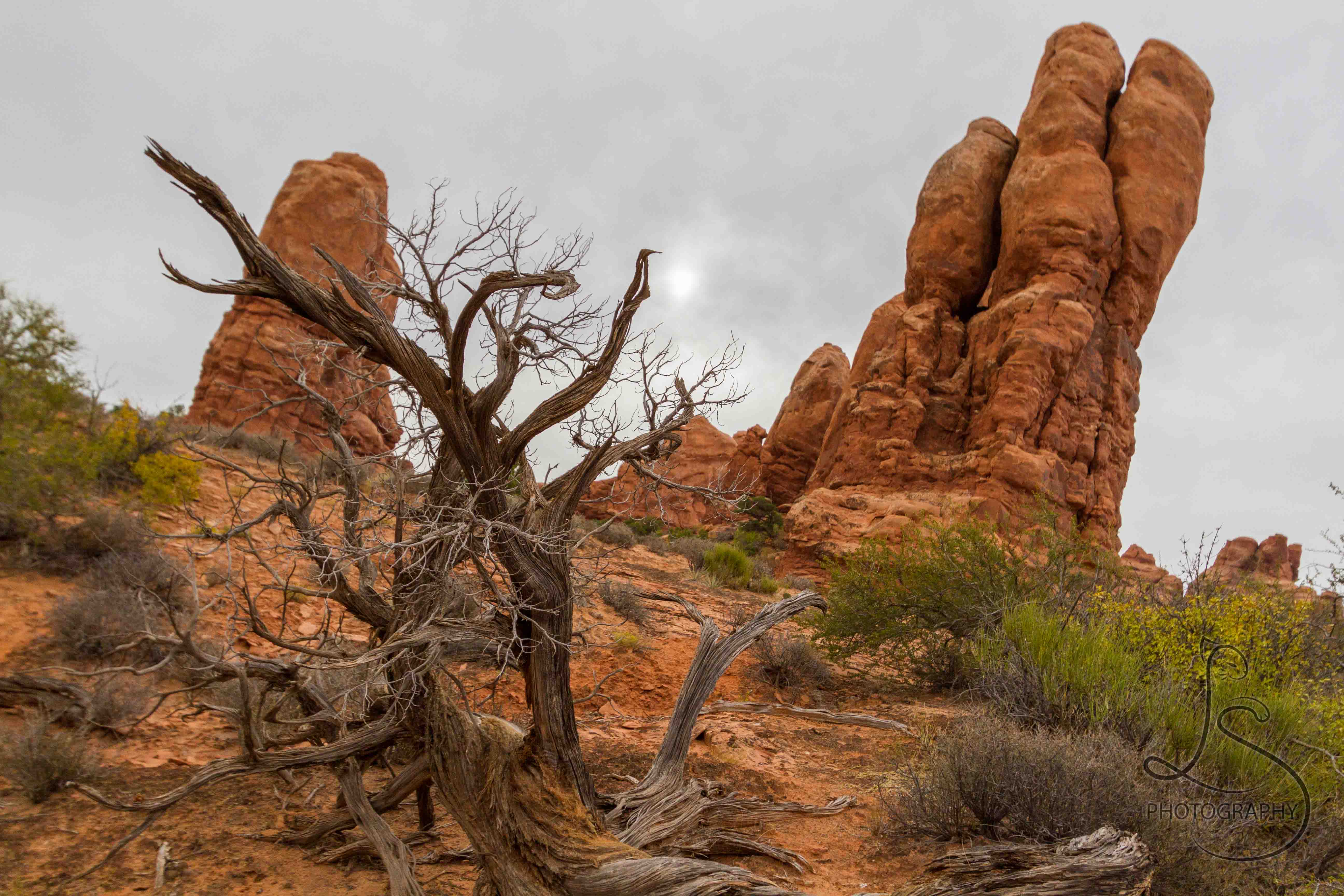 The various pinnacles were fascinating; geology is incredible.  I thought this area east of the Windows would make for a descent sunrise spot, but I’m not sure I’d be comfortable going off-trail in the dark, potentially disturbing sensitive patches of cryptobiotic soil.  Besides, we managed to find a better spot for sunrise anyway.

Next, we hit Double Arch.  This was a really fun arch and was one of my favorites.  There were plenty of people here, too, but most stayed at the bottom.  Dad and I, however, immediately wanted to climb it.

Double Arch is a pair of arches stretching across a large rock bowl, the interior of which is perfect for light bouldering.  And boulder we did.

I quickly rediscovered that it is much easier to climb up than it is to climb down (and people give cats so much flack for getting stuck in trees).  It’s a simple matter to climb up to an elevated spot at the base of an arch, but getting back down takes a certain dose of finesse.  Dad had his walking stick, and the mountain goat used it to get himself up to the highest relatively horizontal surface in the bowl (to the point where he actually had to eventually abandon the stick so he could use both hands).  I was glad we didn’t have Mum with us just yet, as she would have worried to no end.

We hadn’t brought any meals with us, so we made our way back to our condo for lunch before heading right back out again, this time with Mum.

We began the afternoon with a stroll down Park Avenue.  The blades of rock flanking this small valley were impressive.  Horizontal layers are clearly visible, and nature amazed me once more with these razor thin fins that somehow defy rain, wind, and time to remain standing.

We had been warned of the possibility for flash flooding, but I couldn’t quite picture the dry soil running with a river of rainwater.  We did see evidence of small rocks trapped in divots in the hard ground, slowly swirling in what little water they saw and carving a larger indentation over time. 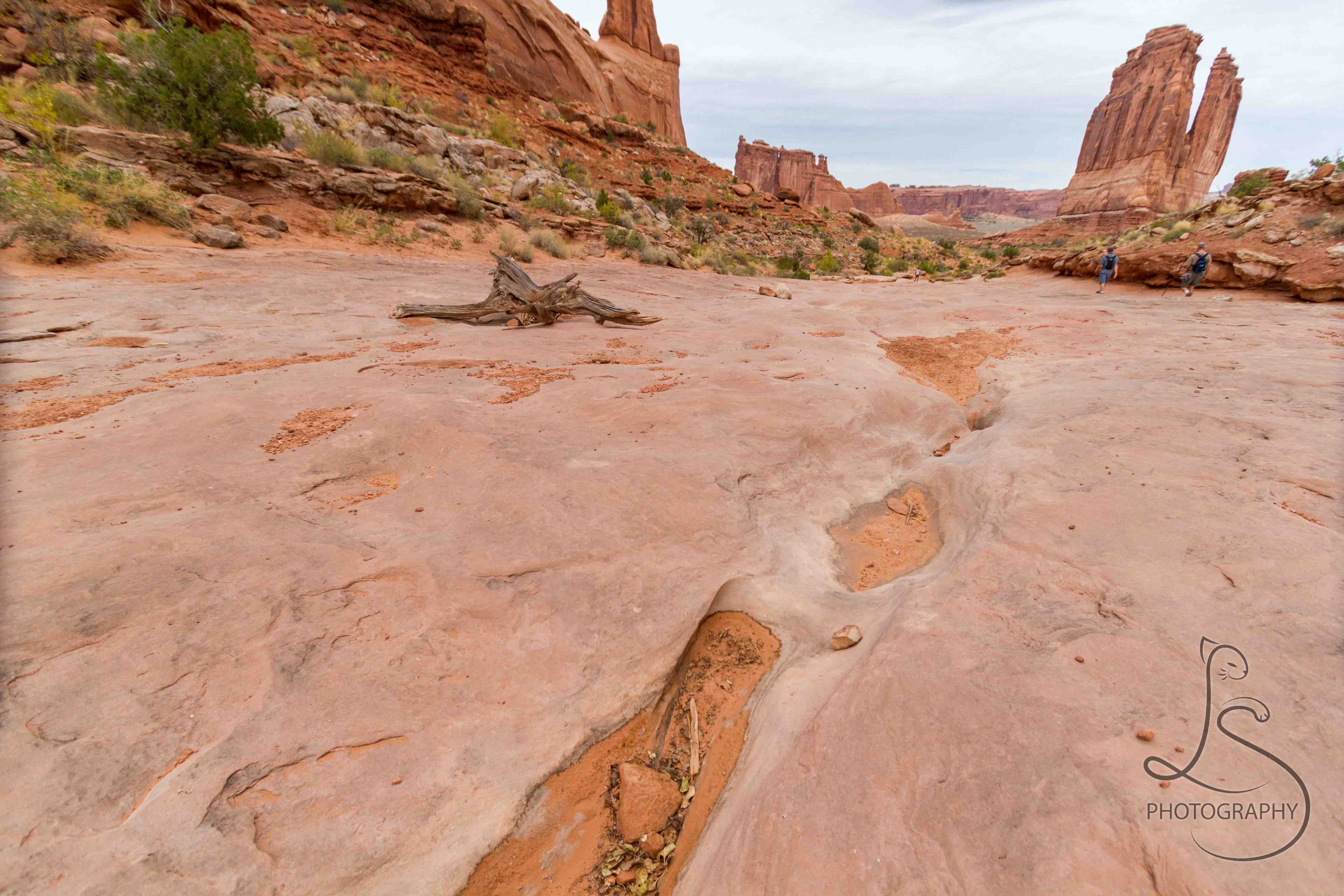 Park Avenue is commonly hiked one-way, and we were glad to have Mum waiting for us at the other end so we didn’t have to backtrack.  We said hello to the Three Gossips, admired the Tower of Babel, then stopped by Balanced Rock.

Another iconic formation of the park, we hopped out for a quick view.  Unfortunately, our timing was epically poor, as we were immediately behind a tour bus loaded with ambling seniors.  It suddenly became a race.  I rushed out to get ahead of them and managed a quick loop of the rock before some had even departed the bus.  I got just enough from the expedited visit, but I was once more reminded why I prefer to hit the sites as early as possible.

We returned to our three arches of the morning to show them off to Mum.  The Windows were a tad farther than I had remembered from the morning, and we somehow convinced her to also make the gentle trek to Double Arch.  But as she sat in awe, we all knew it was worth it.  I was thrilled to see the excitement in her eyes, like she was a child discovering something for the first time.  All she could say was, “wow!”  It taught me that no matter how many years one spends on this planet, nature is always holding a few more marvels in the wings.

Our preliminary thirst for Arches sated, we swung by the Fiery Furnace and Delicate Arch viewpoints on our way out for the day – previews of adventures to come.