Moab is teeming with activities for the adventurous.  Nestled between two major national parks and surrounded by endless desert and an alluring river, it is difficult to get bored.

I’ve been intrigued by Arches for quite some time, but I wasn’t aware Moab had so much more to offer.  Canyonlands is effectively three distinct parks in itself: The Maze, Needles, and Island in the Sky.  The latter is the most tourist-friendly, and this is where we spent our time.  We had aspirations to visit Needles as well, but it proved too distant from Moab to make it feasible, and The Maze just scared us (I’m not quite ready to saw my own arm off…).  Perhaps we’ll venture closer to those two on our next visit. 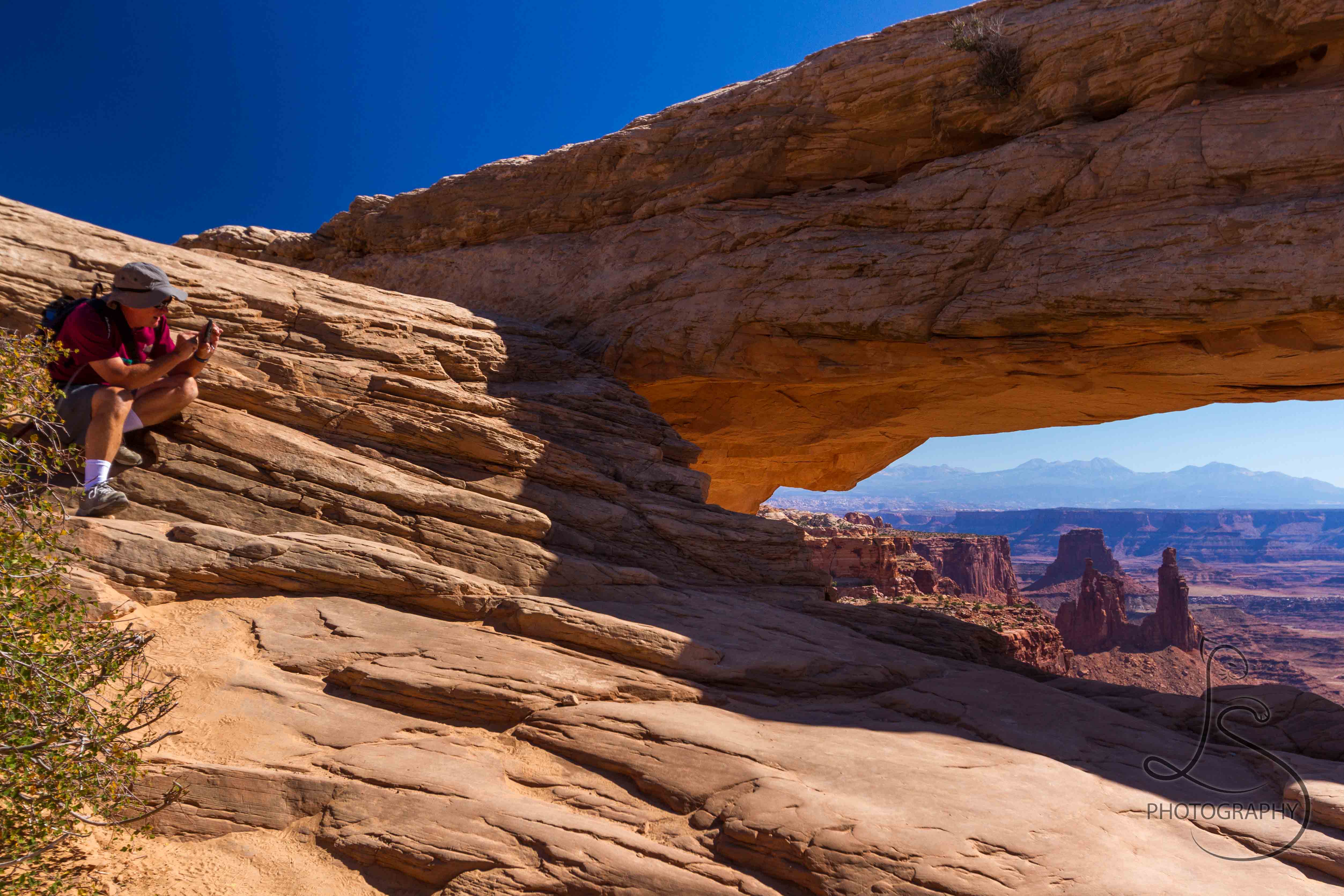 After we passed the visitor center and crossed The Neck, we started with Mesa Arch.  See?  We wound up in Arches after all!  It was pretty popular, but it wasn’t swarming with quite as many people as I expected.  We had adequate opportunity to take our pictures, being sure to hold up the arch lest it fall.

Then we ascended Aztec Butte.  Now, this was more fun than I expected!  We had to pay attention to follow the carefully placed cairns straight up the smooth, layered sandstone. 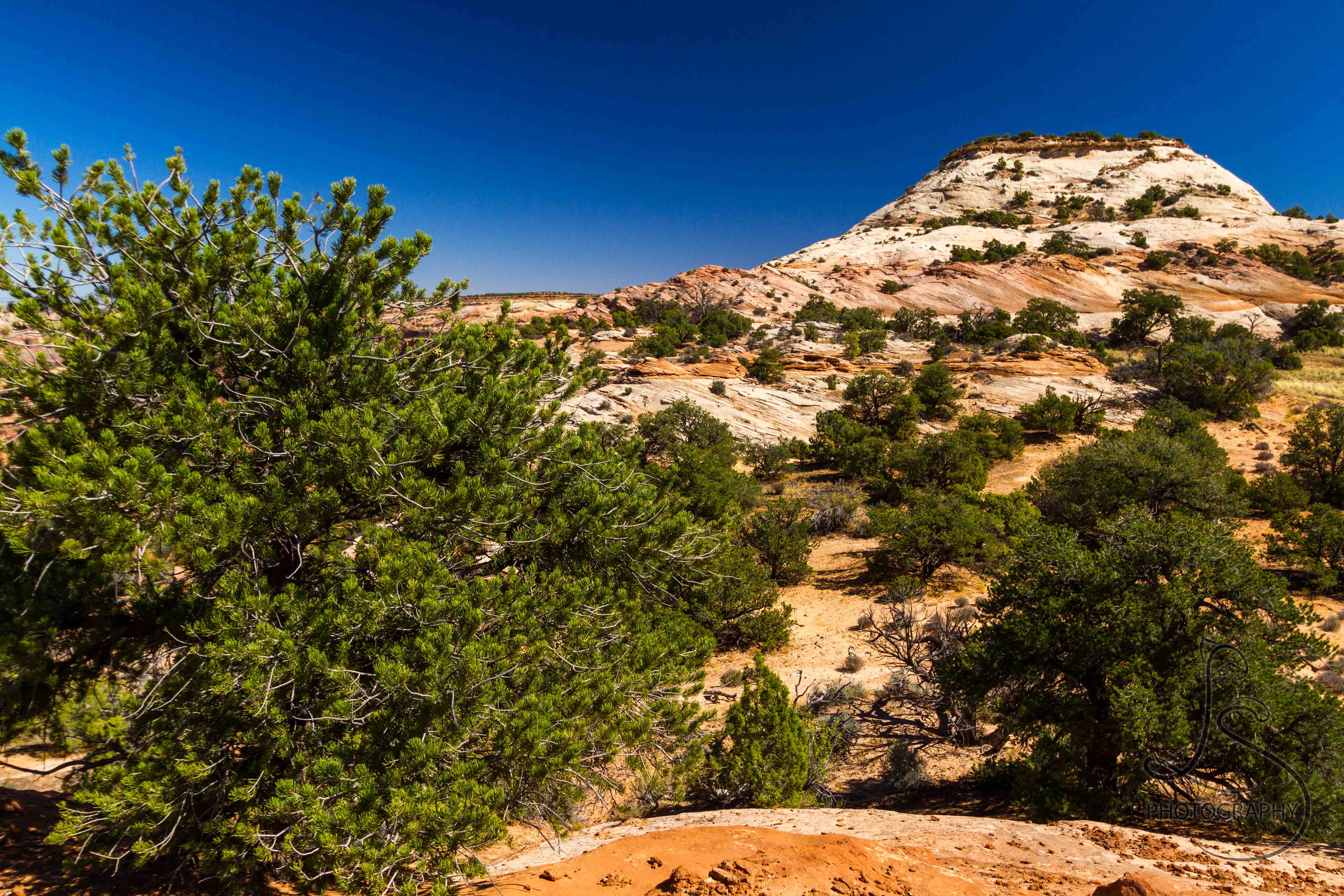 The top rewarded us with a breathtaking view of the canyons below, and we found some granary ruins.  Dad took the opportunity to test the park’s echo skills, and I must say: it’s had a lot of practice!

Next, we made our way to Whale Rock, a large protrusion of rock gently sloping into a whale-like mound.  Over each hump, Dad was tempted by the next (he never sits still).  How can you stop when there’s more to explore? 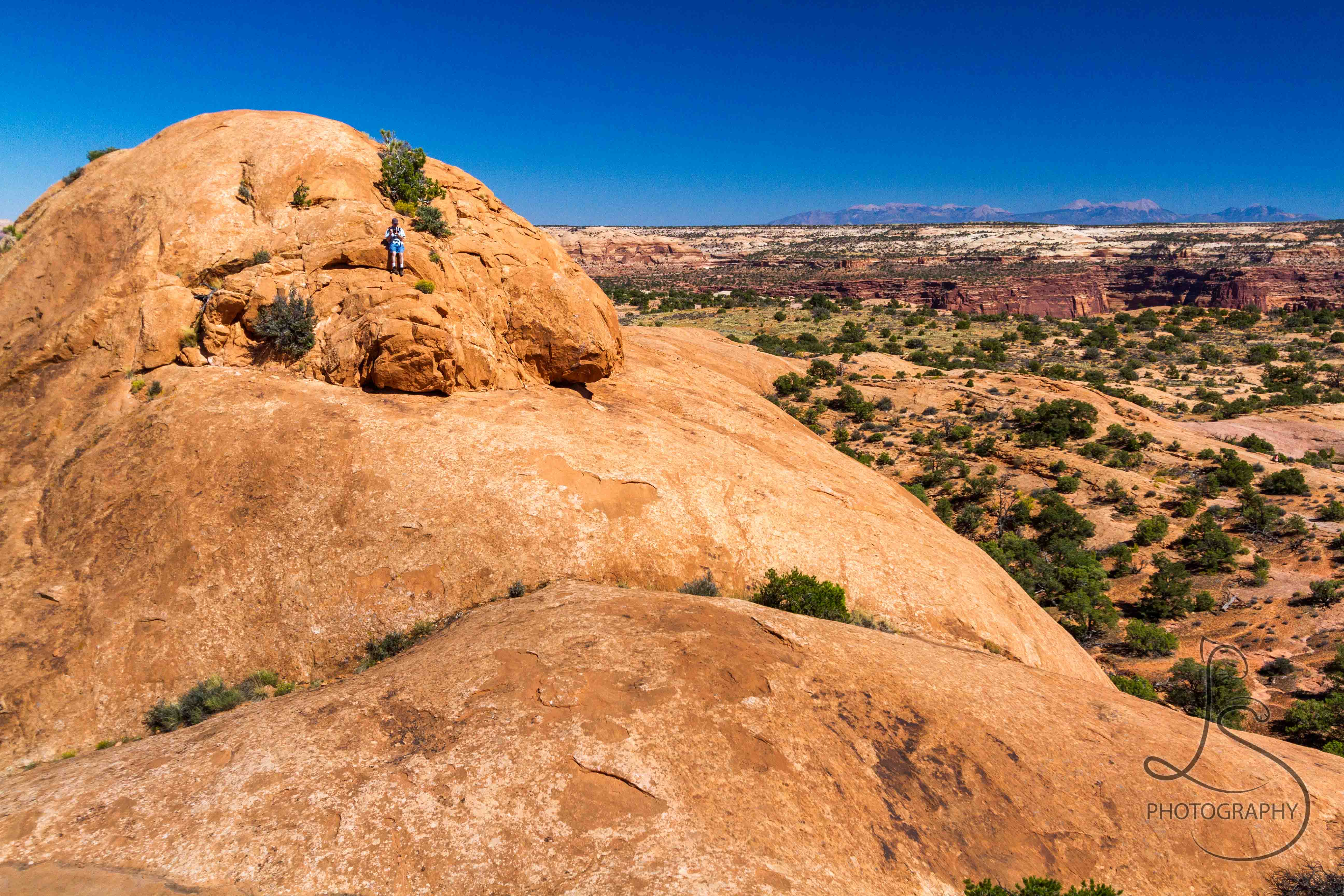 We were also amazed to find a small recess in the rock that was miraculously supporting a mini oasis.  On this barren surface, with nary a bit of soil, water had collected and provided just enough sustenance to support this marvelously scraggly tree.  We were also visited by a little lizard.  Life is amazing. 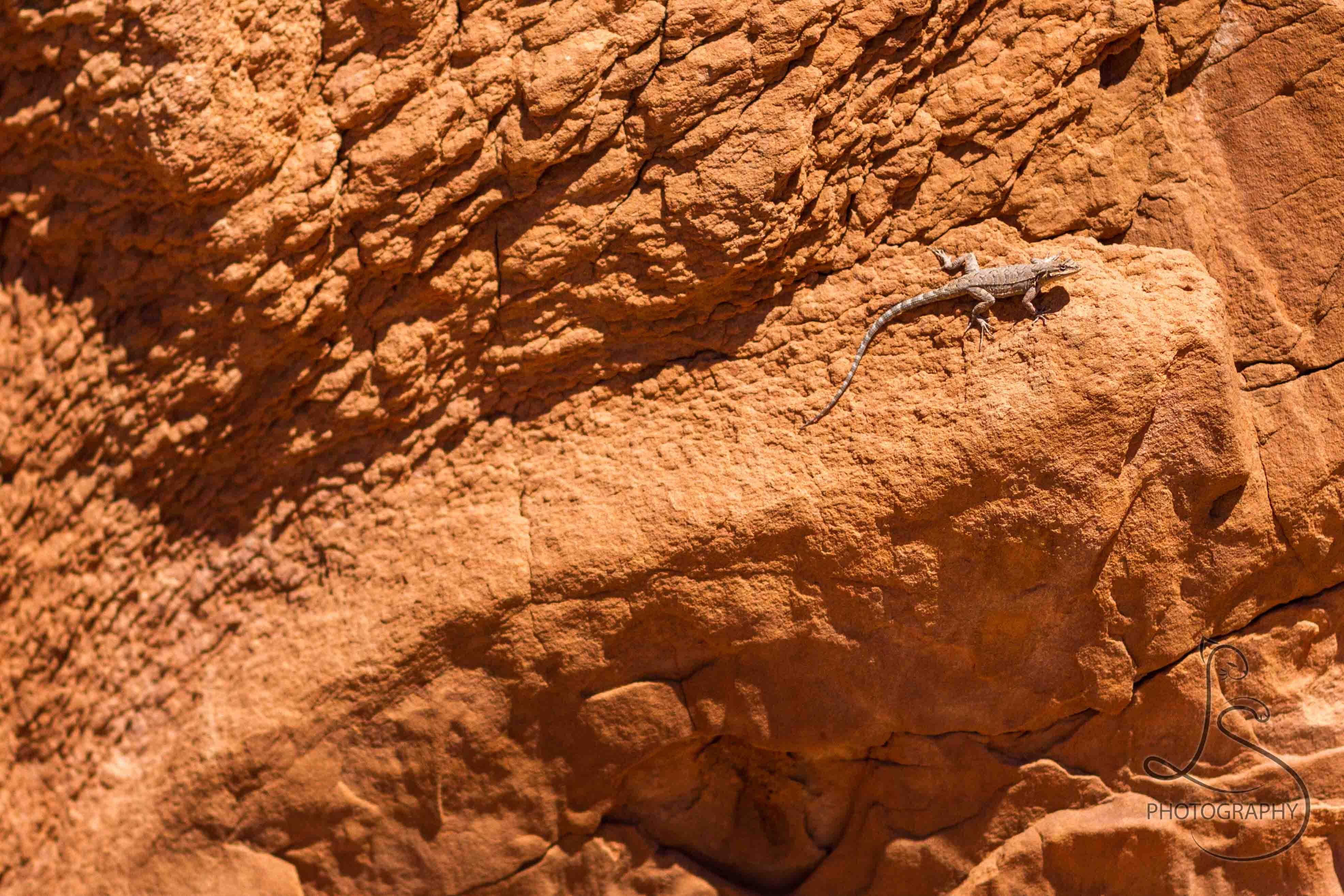 Continuing down the road, we came to Upheaval Dome.  This is a fascinating mystery of geology. 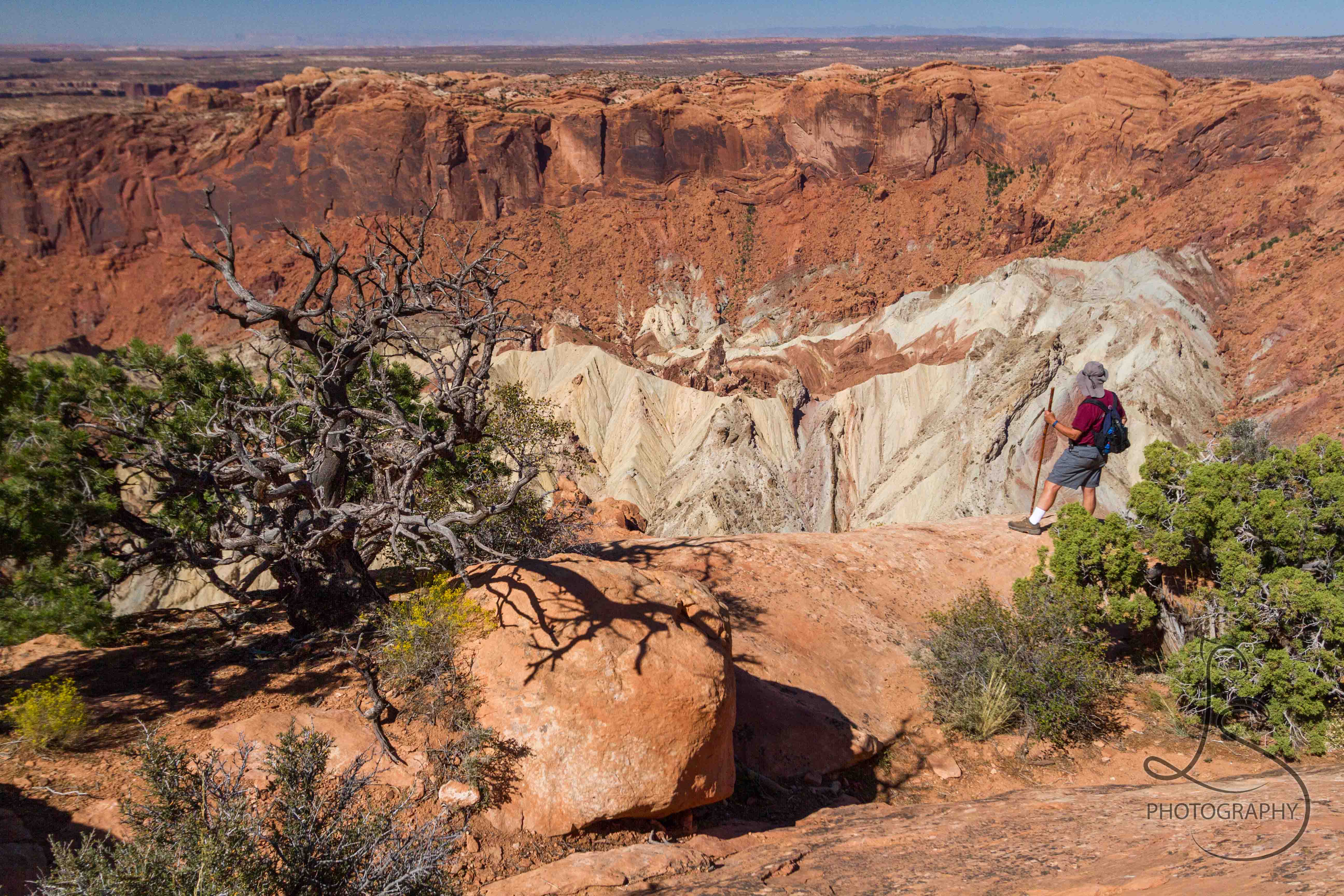 Geologists aren’t quite sure what formed it, but they theorize either a salt bubble rose to the surface and was exposed by erosion or a meteorite struck the land millions of years ago, the dome merely thrust upwards to fill the now missing land. 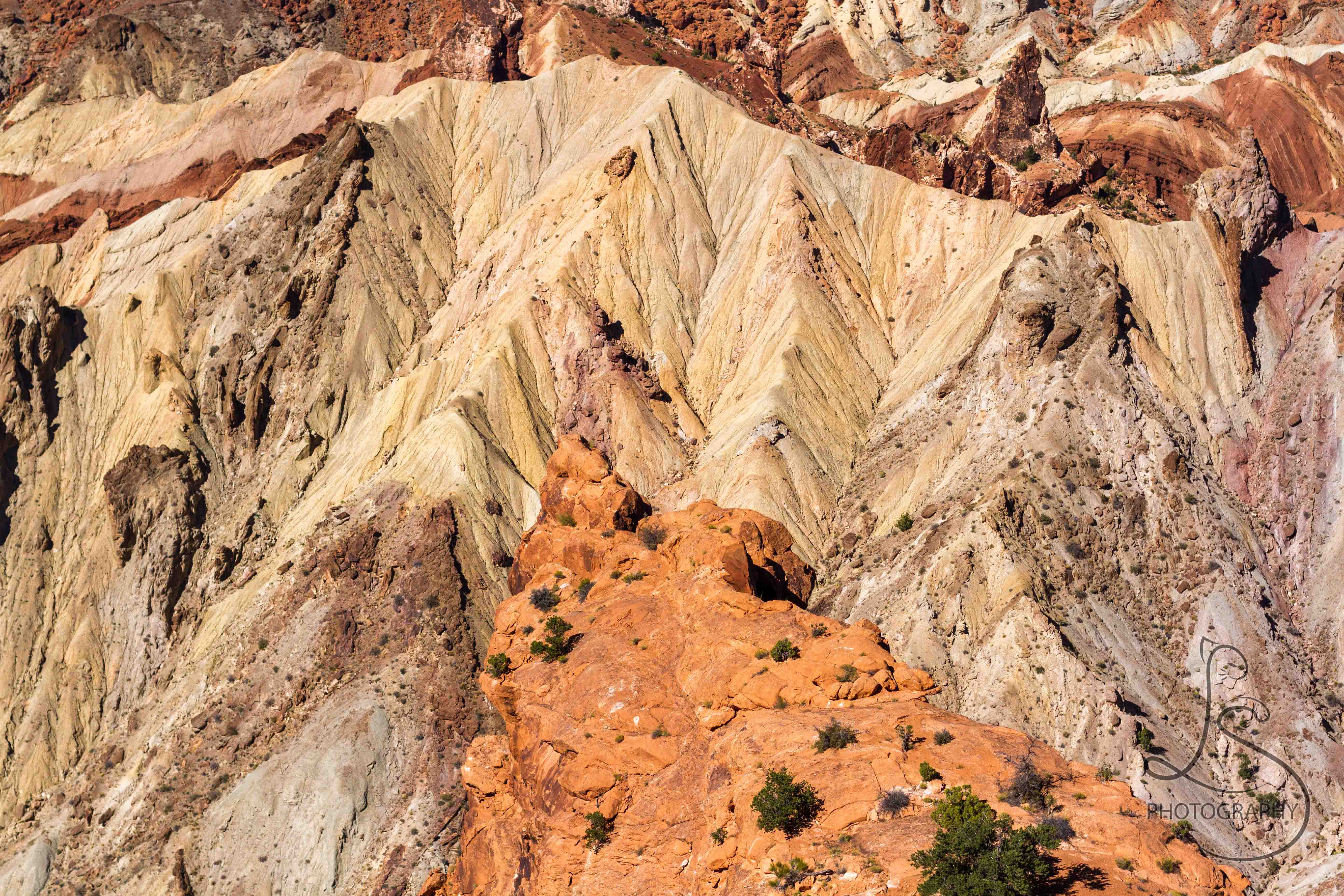 I was most intrigued by the color; it is unlike any of the surrounding rock, pale with almost a blue tint.  Photos don’t do it justice.  We opted to go only to the first dome overlook as it was getting late, and we still had some ground to cover before a sunset hike.

We moved south and hit Green River Overlook followed by the more grandiose Grand View Point Overlook.  The views from both were stunning, and I only wished we had better lighting for pictures (harsh sunlight hurts my poor camera).  We even managed to get Mum out with us – proof she did come with us!  (I do actually love traveling with my parents.)  A place like this sure made me feel small.  Nature truly is magnificent. 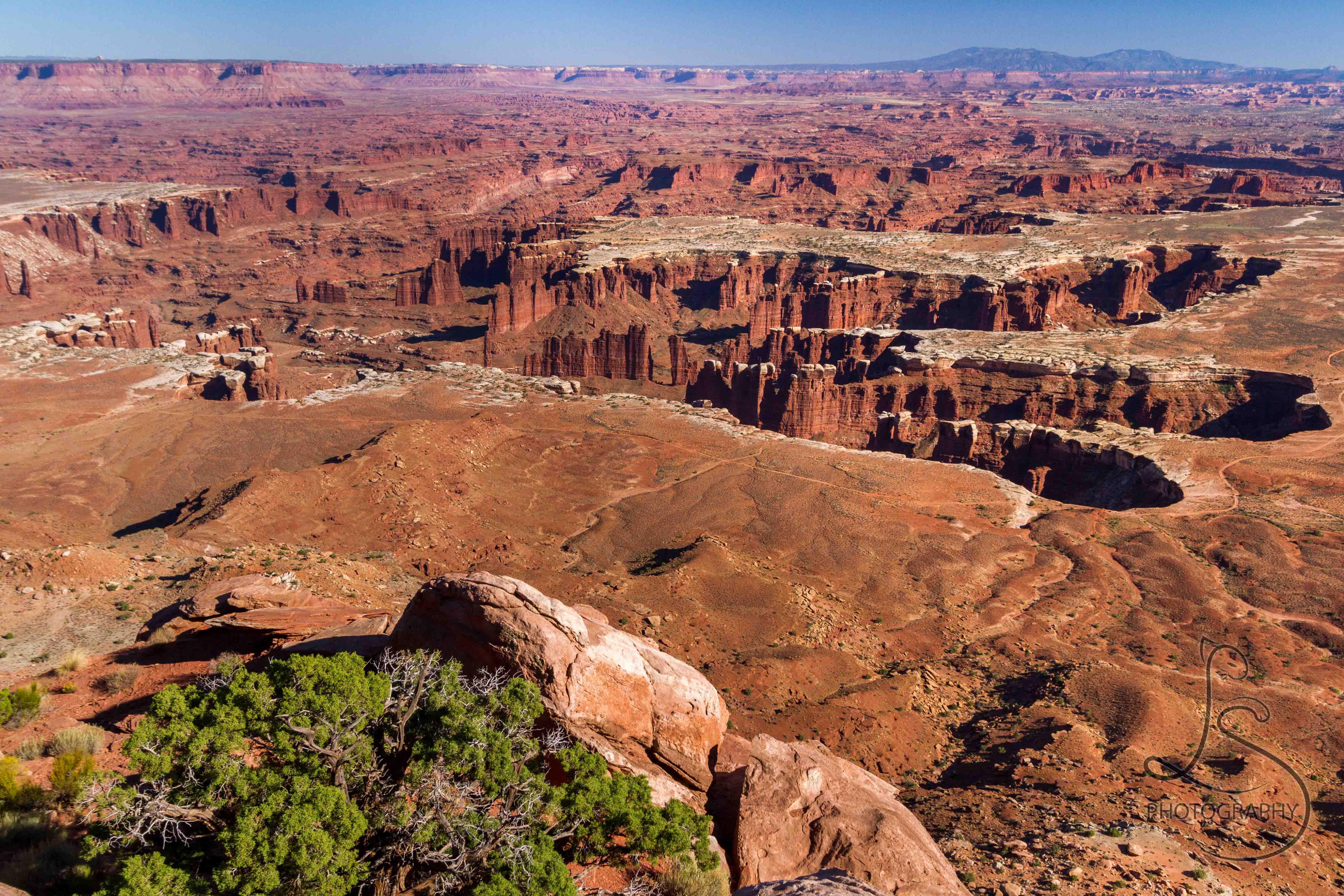 As the sun began to sink, we ventured out to knock the last item off our list.  A friend clued us in on a little-known hike that was simply a must.  We were told sunset from this spot was “epic.”  Much like our secret Moab hike, I don’t want to widely advertise the details, but if you’re interested in checking it out, feel free to drop me a note and I can help you find it.

We left early, anticipating some trouble in finding our destination.  We set out, and it quickly became apparent that we weren’t seeing any of the landmarks described.  Turning around and reconsulting our notes, we tried the opposite direction – success!  Off to a rocky start, but we were back on track.  We paid close attention to the cairns… until they ran out.  We lost the trail.  Search as we might, we just couldn’t pick it back up.  We had a vague idea of what we were looking for, but we obviously weren’t close enough to stumble upon it.  And any direction we tried led us to a cliff or through the brush.  Unfortunately, signal was nonexistent there, and we were foolish enough to not print the trail description.  The sun inexorably fell toward the horizon, and I gave up, setting up my tripod for the fiery dusk. 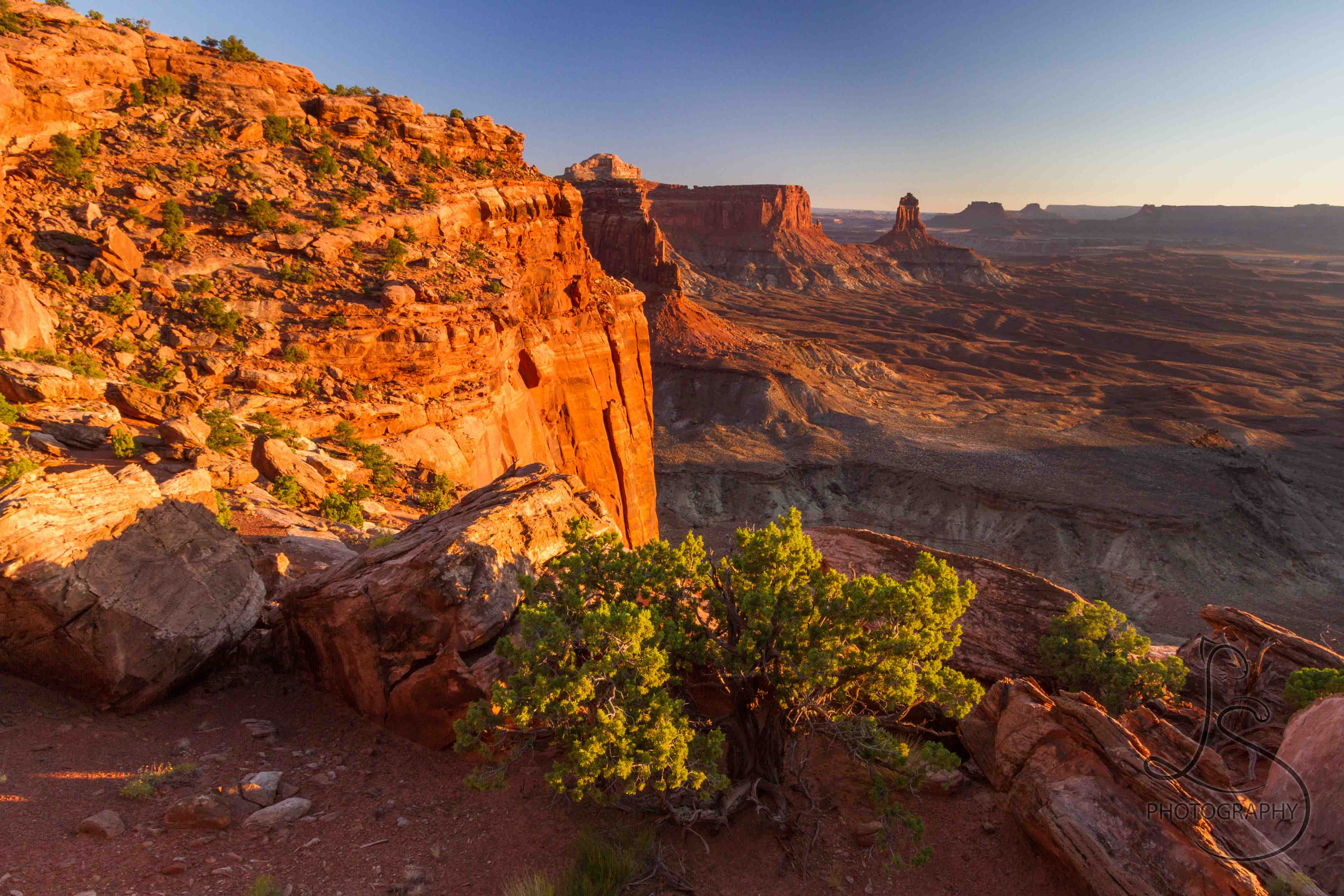 Shortly after the sun fully set, we espied a few other hikers down the hill.  And then we saw it – the supposed claim to fame of this trail.  It was in the complete opposite direction from where we had been searching.  Go figure.  Lesson learned: print trail maps, get coordinates.. something.

Finally seeing where we were supposed to go, I was actually glad we didn’t find it.  It was tucked into the crook of the rock, completely sheltered from the sunset.  We wouldn’t have seen anything from there.  I suspect it would be more picturesque at a different time of year, but we actually had a spectacular spot.  Funny how things work out like that sometimes. 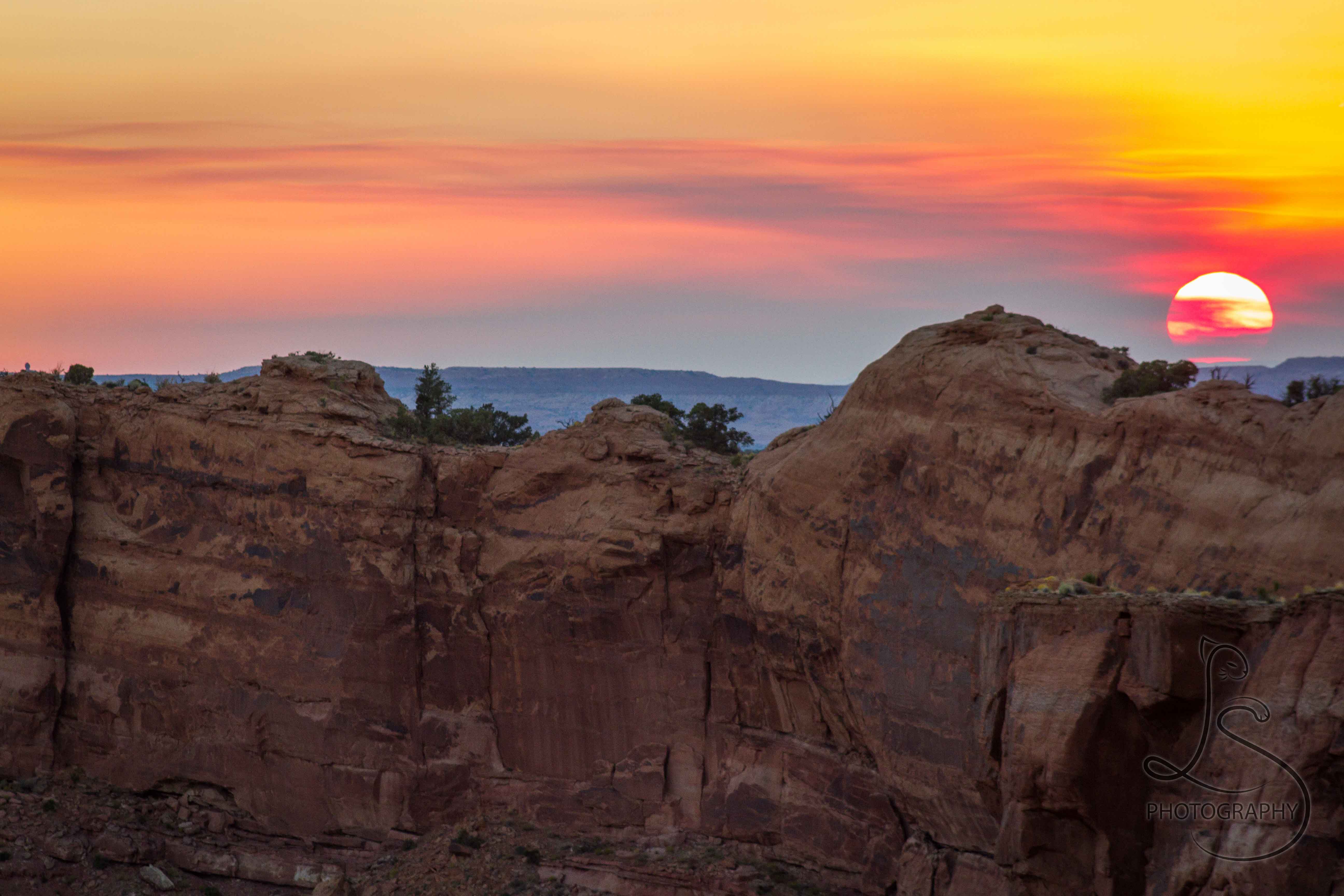 A day was just about the right amount of time to digest Island in the Sky, though I wouldn’t object to a second day to explore some more of the trails farther from the road.  I’m also determined to finally complete our botched hike.. see if it’s actually worth all the hassle.  There is certainly more to explore, but we didn’t do too poorly for the short time we were there.  Canyonlands: achievement unlocked! 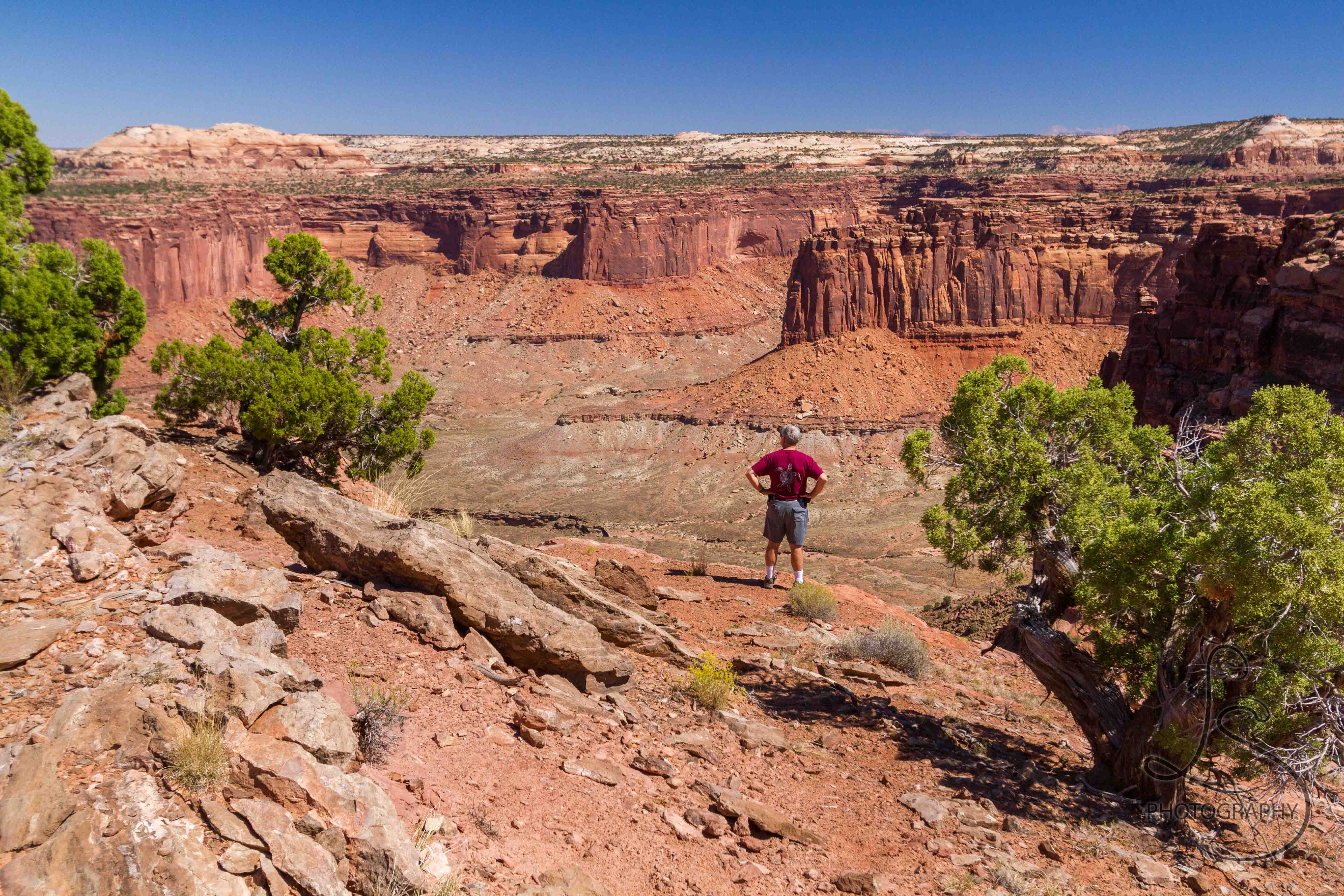 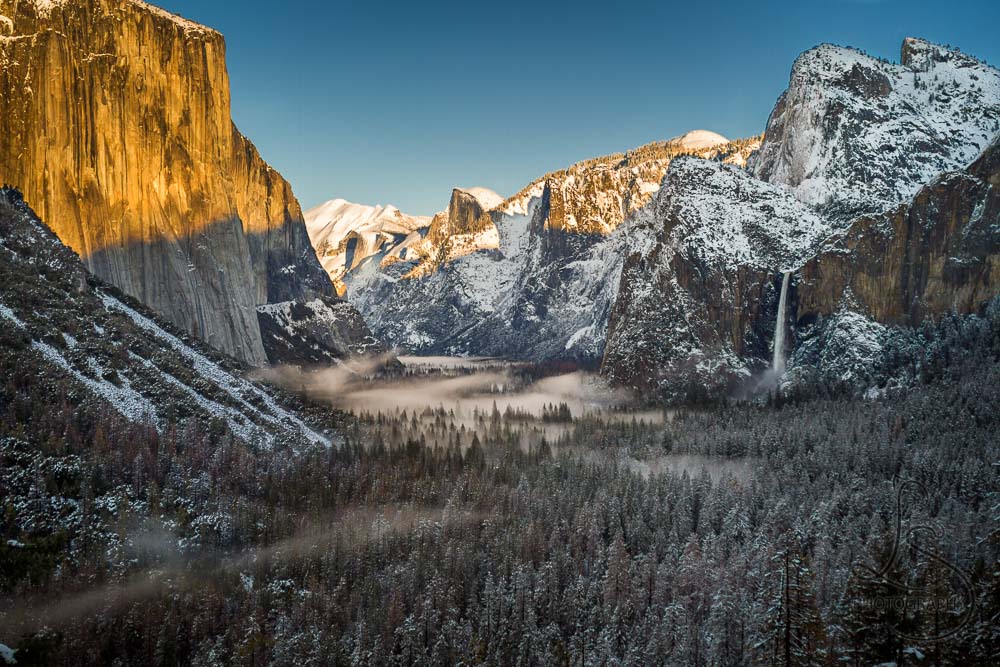