We nearly circled the entire island in our daily adventures.  Seeking out some beautiful waterfalls and lush foliage, we came to a park and campground on the northeastern corner.  It was just north enough that we caught some glimpses of the sun as it descended behind the craggy hills, but not so much as to see it touch the horizon.  This spot is also open to the vast eastern expanse of the Pacific, affording some impressive wave crashes. 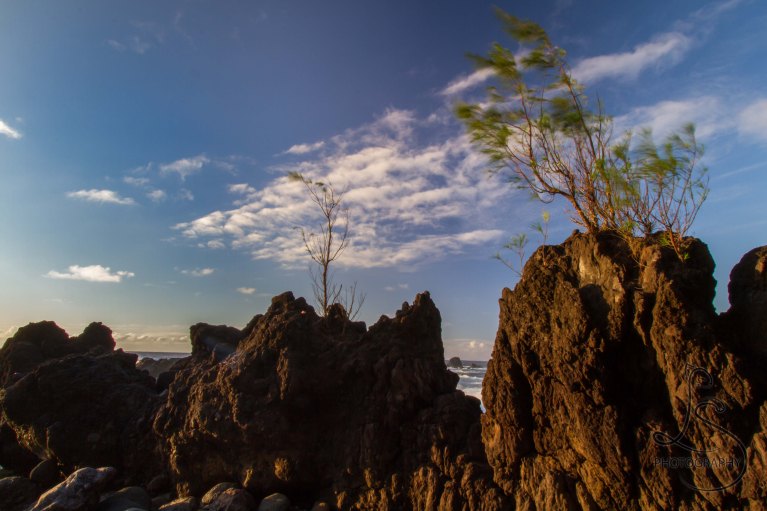 The sun was still too high in the sky by the time it “set” to capture much in the way of spectacular colors, but blue hour was rich, and we had many fun items to play with in the foreground.  After I snapped the rocks sprouting young saplings, a few HDRs, and a colorful crab, I quickly grew bored.

While my fellow photographers oohed and ahhed over the waves crashing into the little cove, I moved across the lawn to an amazing metal structure resembling a dock.  The eastern side featured piles of what looked like giant anchors.  I struggled to imagine what their purpose might be aside from photography fodder, but they served that purpose quite well.

I couldn’t get enough of the industrial angles and the rustic structures.  Before I knew it, I was holding everyone else up; they were ready to head back to our rental and chow down on some grub.

This is a beautiful park. I think next time I’ll want to actually camp here and perhaps capture some of those stunning Hawaiian stars that eluded us on Mauna Kea.