In my last post, I summarized my journey into the geekdom of anime.  I have been to many conventions, and I continue to add more to my repertoire, but my heart and my home lie with Kumoricon.  It’s easy to claim this convention as mine.  It’s local, anime-specific, and it was the con that really solidified the otaku within me.  I have since met many friends, I have so much fun shooting it, and it is always the convention which I most anticipate.

My con experience evolved when I began staffing, and I must say, nothing’s better.  As an attendee, I would wander with my camera anyway, so staffing isn’t much different.  In fact, it’s an upgrade!  Shooting for the convention, I can still attend every panel I want to, I am guaranteed the best seat, and I never wait in lines.  Not to mention my badge is free.  Don’t get me wrong; it’s still a lot of work.  I get very little sleep, and I have a huge responsibility of making sure all of the most important events are covered.  However, I continue to return every year; it’s worth it every time.

Kumoricon 2015 was one of the best yet.  I entered this last Labor Day weekend with more excitement than I’ve had in years, and I left with some of the worst PCD (post-Con depression).  I attribute both to the fact that we’ll be at a new location next year.

I was entrusted with creating a video that would announce our move to the Convention Center.  I started with one of my favorite songs, a truly pump-up tune that I never tire of hearing.  Good thing, too..  As any video editor knows, you’ll listen to every second of that song over and over, frontwards and back, timing titles and matching transitions to every snare.  I pored over thousands of pictures from all Kumoricon staff from the past five years (only those at our current location) to find the best, and then I faced the impossible task of paring them down to those that would fit into three and a half minutes.

I made the mistake of working on this video in the evening before bed.  Energized by the song, excited to have nailed some particularly elusive timing, and ultimately anticipating the reactions of nearly a thousand attendees to the news therein, each night leading up to the convention only made it harder to wait.  I found myself needing evening walks just to calm my brain enough to sleep, and I practically bounced my way into Opening Ceremonies.  The crowd didn’t disappoint, and we captured some awesome reactions to the news.

Much like December 26th, it was a bit disappointing to descend from that high.  Fortunately, I had the tidal wave of Con still awaiting me.

The highlight of Day 1 (aside from my video during Opening Ceremonies) was photographing the Slants concert.  Concerts are fun to shoot, because my subjects are (usually) well-lit on stage, and they’re always doing something interesting.  It also affords me some options for detail shots and experiments with depth of field – microphones, a face peeking through a drum set, etc.

In an intimate environment like this, I also have the freedom to get up onto the stage, itself, getting the coveted behind-the-performers and the drummer shots.  How many concerts give you that opportunity?

Two moments, in particular, made that concert interesting.  Ken, the lead singer, crowd-surfed (he said for the first time), to the delight of their fans, and I was poised on the stage, ready to capture it.

Secondly, Tyler (drummer) broke through a drum mid-show (he also broke a few drumsticks).  All of the media present raced in like ants to honey to document the moment, and I took the opportunity to immortalize the flurry of activity from the media staff.  I love candids, and I love meta-photography!

Day 2 is when we debut our new cosplay for the year (seen on the side).  We were late in starting it, so we went with something relatively simple.  I now know how to sew a kimono!  I hope to use that again in the future with something more interesting than white fabric.  I broke a needle in the process and bent many pins, but Holee was there to help me, ensuring the material didn’t go anywhere before being thoroughly infused with fuzz.

The day also brought some of my favorite people.  David Vincent is a lively voice actor, interesting to talk to, and his panels are always entertaining.  He was more obnoxious than we were as a willing frontrunner in our prank in 2013 (more on that later), so I look forward to seeing him at Con.  I attended his voice acting tryouts at Sakura-con, so I knew to expect a fun panel here, and he even made a cameo appearance as a “prize” for the 18+ Dating Game later that night.  He is very animated and expressive – a great subject for photography!

And we had a second concert this year, Kieran Strange and the KIERAN Project.  For something like a concert, I love to double-fist – two cameras, two lenses at the ready.  The fast pace makes changing lenses detrimental, so this lets me quickly switch between a telephoto and my 50 prime without missing the fleeting moments.  However, there were a few instances when I wanted my wide angle.  When I had one camera, I always wanted two lenses; now that I have two, I’m always pining for three!  I managed, though.  And with multiple cameras, I’m careful to sync them so my pictures maintain their chronological order when I pull all of the shots together.

Sometime on that day, I decided to experiment with the AI servo focus mode – something I had read about with regards to wedding photography.  It totally changed my concert shooting!  In conjunction with switching my focus to a thumb button (instead of holding the shutter button half way), the number of in-focus shots increased dramatically.  I snagged some amazing shots (if I do say so myself), pictures that never would have been possible (for me) in another mode.

I also loved shooting Kieran.  I got to know her a bit the previous day during her Q&A panel, and this was after I discovered it was her dancing Gangnam Style with attendees during Opening Ceremonies.  She’s a very fiery individual, fun to watch, and quickly leaping into whatever’s happening.  She proudly declares that love knows no bounds and sings into a rainbow microphone.  She’s confident and beautiful, and she inspires others to be the same with a “BE YOU” written right on her face, and though it might sound weird, she’s honestly the first guest with which I would love to become friends.  I instantly respected her and related to her; she seriously made my con.

This day unfortunately brought some disappointment.  In 2013, we started a Publicity department tradition of pulling a prank with the guests on the attendees.  Our first year, we did Elevator Paparazzi, where we staged ourselves on a floor just outside of the elevators with every camera and bright flash we could procure.  Doors open, paparazzi!  David Vincent had a BLAST, the loudest of all of us with calls of “who are you wearing?”  The next year, we did Reverse Fangirl.  Chuck Huber and Bryce Papenbrook picked out a cosplayer in the park and raced up to him or her, crooning over their outfits and begging for autographs.  Some were startled; others played right along.  And we captured it all on film. 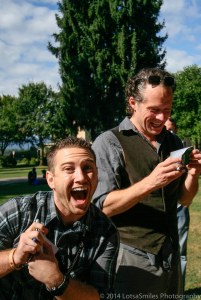 This year, we had planned to do a photobomb prank, and I had worked with the Relations department to set aside some time and get buy-in from the guests.  We were all set to go.. and then things changed.  Some felt the prank wasn’t quite big enough, so we got the idea of zombies instead.  Unfortunately, understandably, this got to be too big, the time commitment wouldn’t fit into the guests’ schedules, and frustrated parties simply called it off entirely.  I was pretty bummed, as we had a really awesome group of pranksters on our guest list, but it gives me some things with which to better plan for next year.

The night ended on a happy note, at least, with the first of two Whose Line panels (put on by Conventional Improv) and the NSFC edition of the Dating Game (hosted by the Anime Hunters).  Both brought uproarious laughter and blackmail-worthy pictures.

Zach Marsh of Conventional Improv was afraid of floors in this game! So Chip Lawson carried him to safety.

Two days went by so quickly, but the convention was only halfway done!  With the Cosplay Contest and Cosplay Chess still ahead, I had much to look forward to, but I must save that for another post…

The hotel had just had its carpets replaced, so they were shedding everywhere!

A simple doll pattern just wouldn’t print for Sierra Rice; it took out several printers. It was deemed the “voodoo dolly” …before it was discovered to actually be a voodoo doll pattern! One reason I love staffing.