Ok, I know I promised more on our desert road trip, but something happened… SNOW!  Besides, I just hit 100 followers on my site, so I want to celebrate with a special post on this very beautiful phenomenon that brings me such great joy. 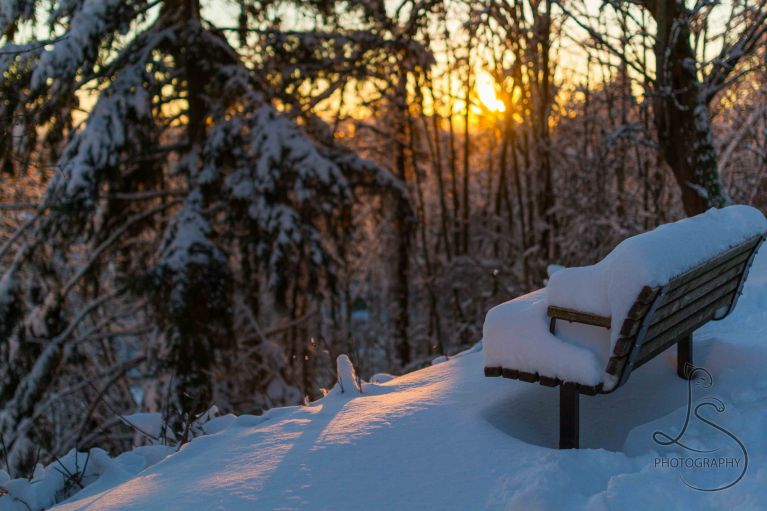 So, a few things.  First, we almost never get snow in this area.  Our summers are mild, and our winters are temperate.  Generally, it only gets really cold when the clouds clear (which they are reluctant to do in the wintertime) and all the heat escapes into the atmosphere.  Clouds act as a blanket that keeps us warm.  Therefore, it’s either warm and rainy or cold and dry; we seldom see precipitation when it’s cold.

Second, I love snow.  I might love autumn best, but snow is the one rare treat that earns winter a place in my heart.  It’s quiet and pure, falling with tickling whispers.  Nights are brighter, and daytime is blinding.  It’s soft and fluffy (like a cat, right?), and it both slows the entire world down and turns the daily noise down to a nearly imperceivable muffle. 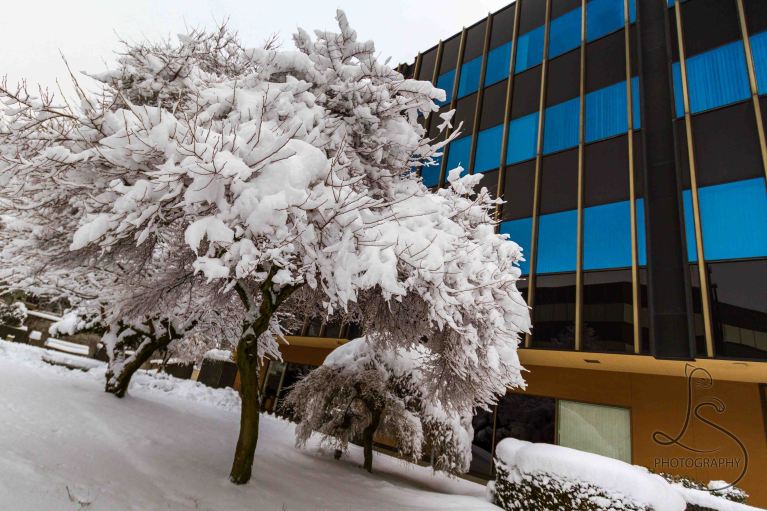 It’s fun to play in, whether it be building snowmen, having snowball fights, sledding, or skiing.

Snow is nostalgic, rekindling fond memories of attempting to build an igloo with every snowfall growing up in Colorado (though I never succeeded) and running in for hot cocoa when I could no longer feel my fingers.  And if we got enough snow, it meant a snow day – an unexpected day off from school with nothing better to do than to get frostbite, shove freezing snow down the back of my little brother’s coat, and drive my parents crazy. 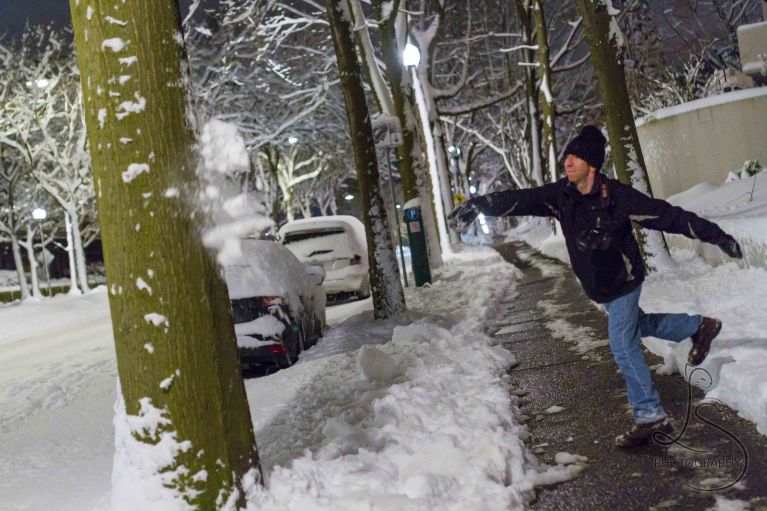 Nowadays, I love it for its fundamental beauty.  I’m a photographer, after all, and snow makes even the most mundane landscapes simply magical.

In the Northwest, snow isn’t the light airy stuff I’m used to from Colorado; it’s wet.  It’s heavy and dense – perfect for packing.  Skis actually stick to it (which was a new sensation), and it causes a mess on the roads when it all condenses to ice instead of dry snowpack.  But it also means giant, stunning snowflakes (I really should acquire a macro lens at some point and capture some). 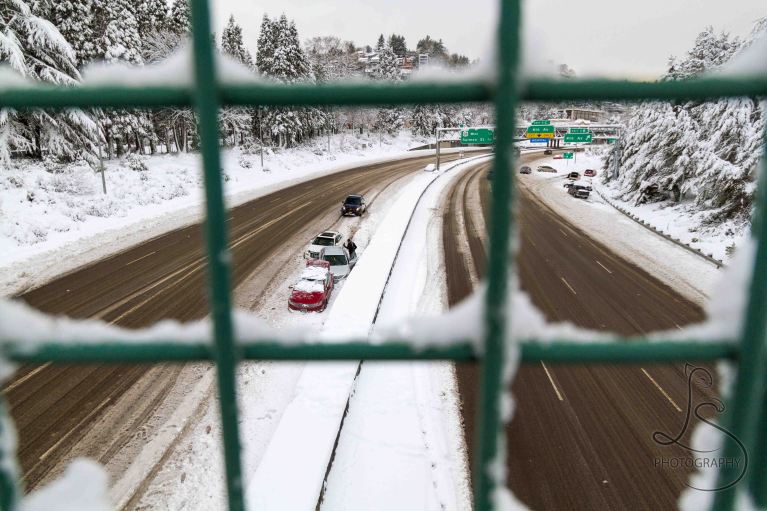 Lastly, the last time Portland saw a storm like this, we were in Colorado for Christmas – where it was completely dry.  The irony was not lost on me.  We eventually got to see some of that snow, but it wasn’t until we got ourselves stranded in Idaho for a week.. a story for another time.  Needless to say, I was very disappointed that year.  I love snow best when I don’t have to drive in it, and I can snuggle up at home under a cozy blanket, with a warm kitty in my lap, a hot beverage in my hands, and a good book.  Bonus points for a fireplace.  Folks around here still talk about the storm of 2008, and we missed it.  I’ve been bitter ever since. 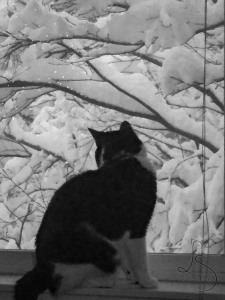 Fast forward to this year.  1-4″, they said.  It won’t stick around for long, and it’ll all melt quickly, they said.

The storm clouds rolled in, and the giant snowflakes fell from the heavens… 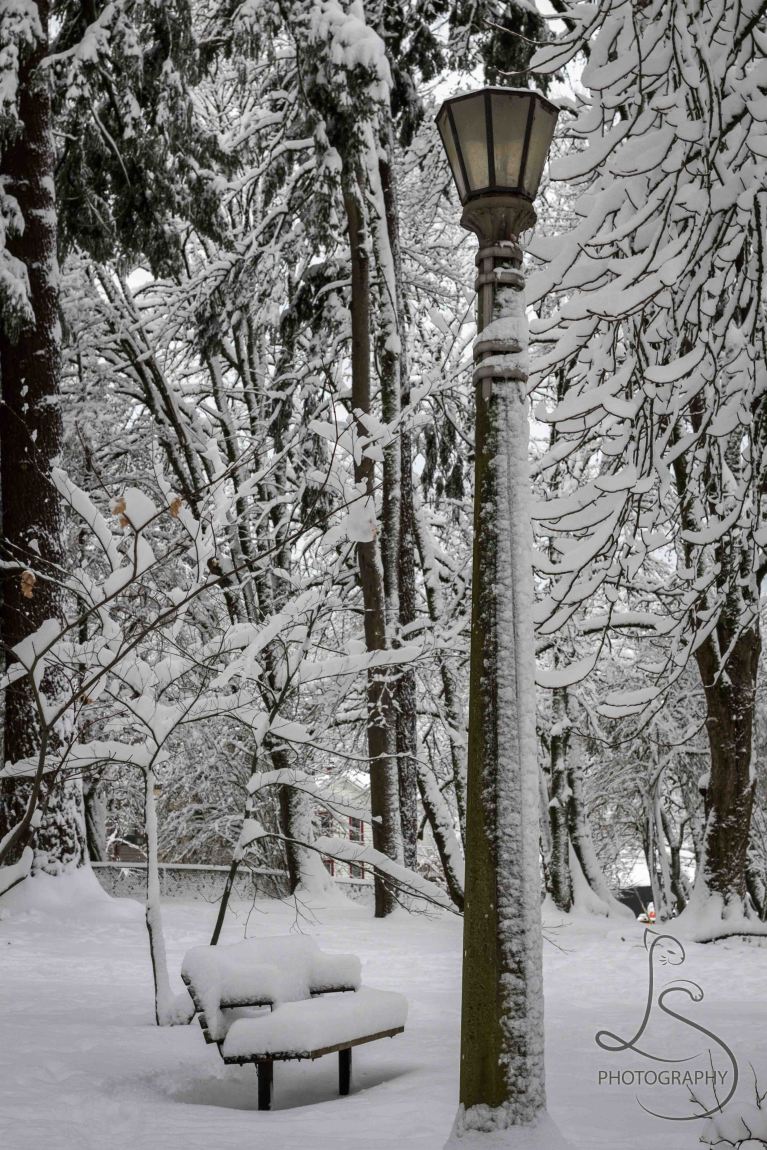 …and they didn’t stop.

Within an hour, we already saw the few inches they predicted accumulated on the ground.  I started excited, and I was practically beside myself with exuberance as it continued into the night.  I couldn’t stop watching it; I was memorized.

I woke to a breathtaking winter wonderland.  A bright blanket hugged all the land around me, transforming the world I knew into a foreign landscape of enchantment.  I couldn’t wait to grab my camera and go explore.

Unfortunately, I didn’t get the snow day I expected.  The curse of modern technology that permits my working from home (though, I suppose that’s better than the alternative of being forced to report to the office).  I couldn’t break away until almost 11am, at which point much of the pristine snow had already been disturbed. 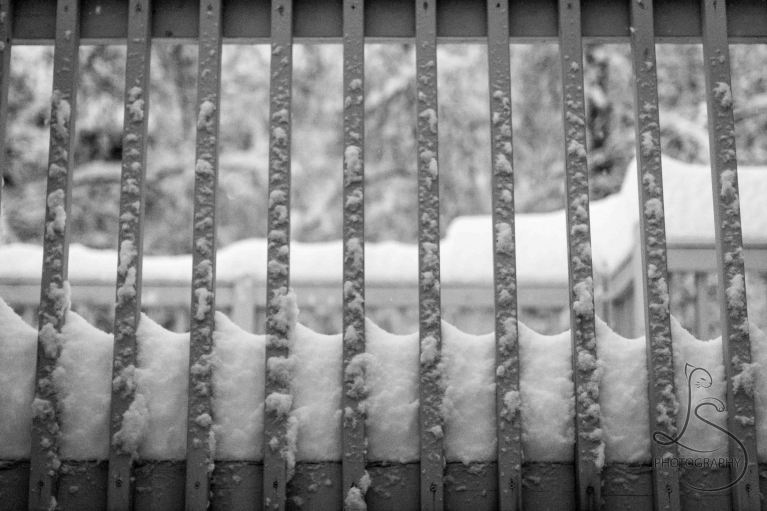 However, nothing could dampen my mood.

I didn’t make it very far, such was the level of my distraction.  I had to shoot everything around me, and I’d barely walk three feet before some new shiny perspective would ignite my inspiration. 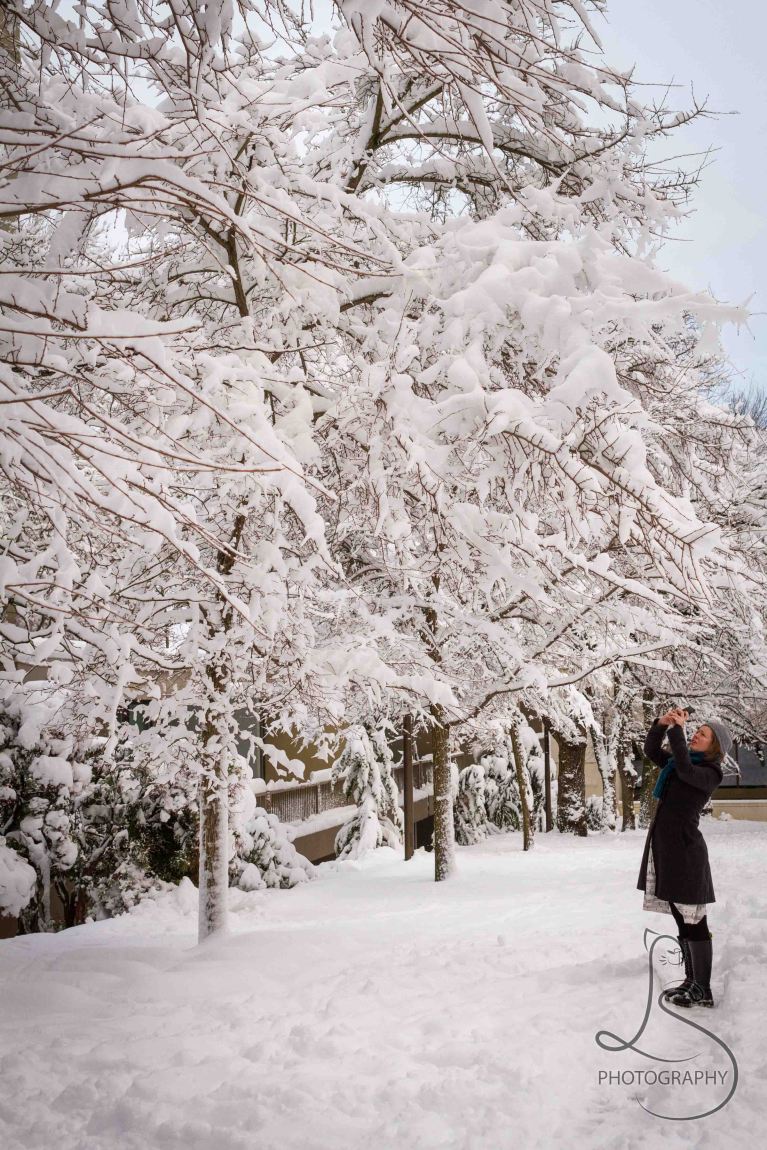 And the trees!!  The wet snow stuck to everything!  The trees were completely white, something I would never see even in Colorado; this is a rare Northwest treat.  That meant we had many that fell under the sheer weight, but the ones that stood looked surreal all heavily laden.

It also clung to everything from the power lines to chainlink fences to railings.  Look at the lines of snow sagging from the weight yet sticky enough to hold on!  (This is a straight railing.) 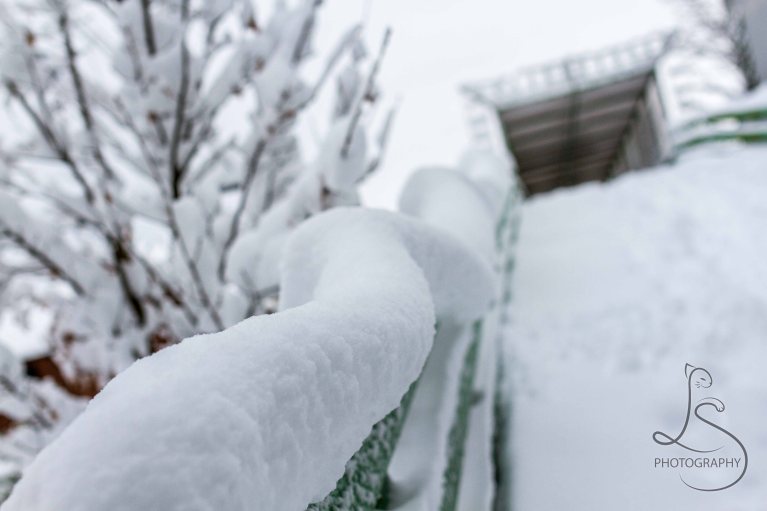 I have also previously shot this Shawshank Bridge; it looks completely different with snow. 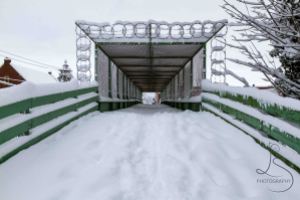 Ultimately, I felt the tug of responsibility once more and grudgingly returned to my corporate leash.  I managed to escape a bit early, and Aaron and I went back out for more photos. 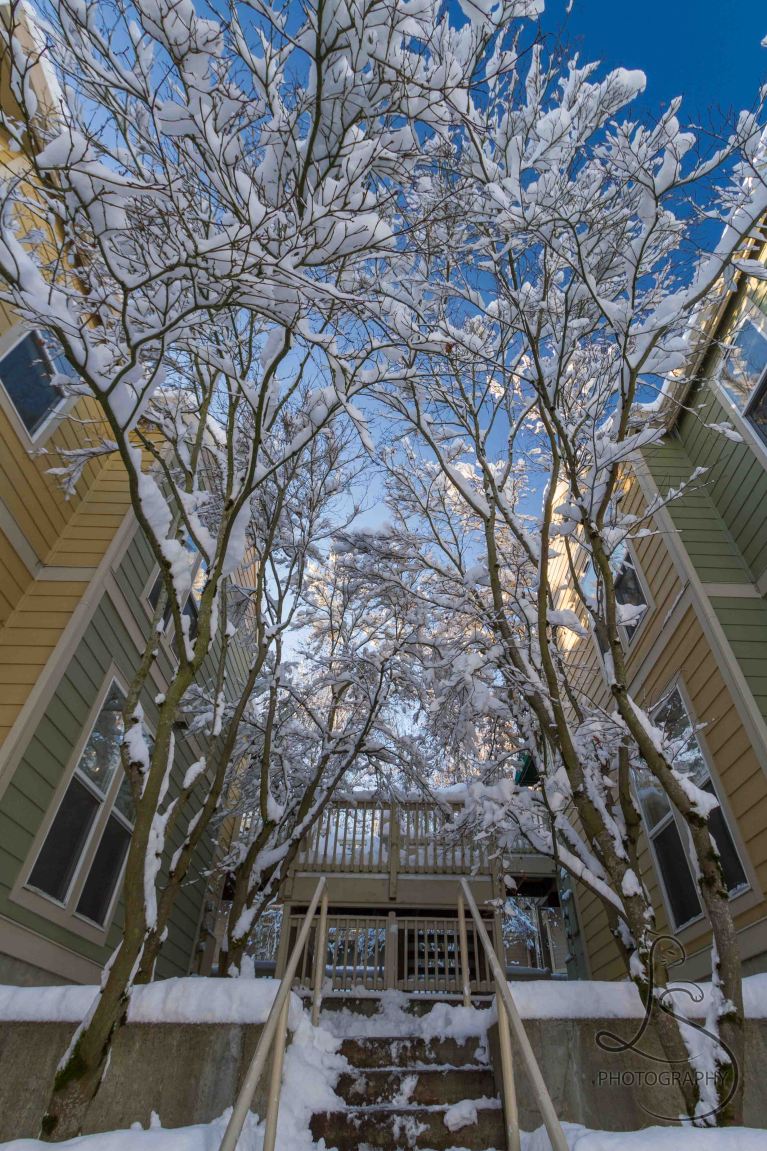 The sun set, and Aaron got cold, but the fire of excitement left me immune.  It was getting dark, but that didn’t stop all the residents from continuing their snowy games, sledding in the park and building massive snowmen with odd bits and ends.  Others could be seen crossing a bridge in cross-country skis or carting a snowboard to the nearest hill.  It is also a tradition for locals to ski in the streets of the west hills.

Why not?  When it snows, the city shuts down.

Hunger ultimately got to me before the cold, so we popped into a restaurant for some warming drinks and ended up having a wonderful conversation with a couple visiting from Colorado for their grandson’s birth.  We had a lot in common, talking about our shared alma mater, military upbringing, and the difference between Colorado and Oregon snow.  It was great to connect with complete strangers like that.  Everyone just seemed happier with the magic of snow embracing them.

I was disappointed to have not gotten out early enough that day to capture the untouched stretches of snow, so I was determined to catch a snowy sunrise the next day.  The clouds had cleared, and I saw we’d actually see some daylight, so I grabbed my headlamp and hiked up the hill to the local vantage. 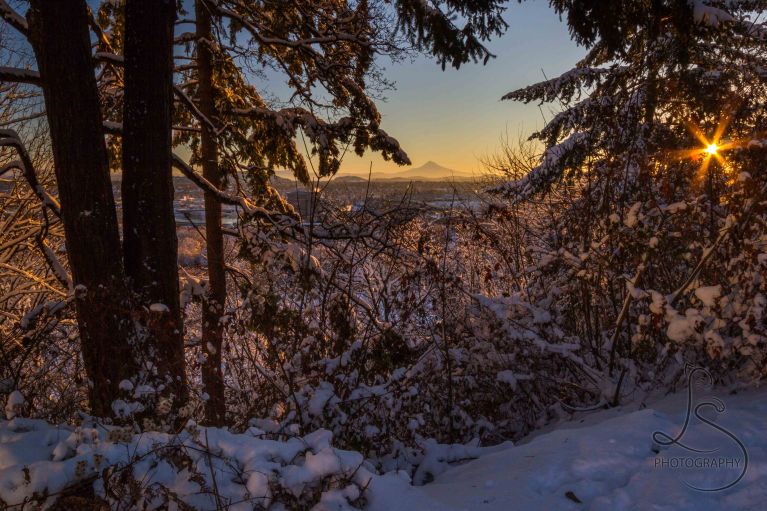 While there weren’t any clouds to make for a spectacular sunrise, I was focused on the foreground, and I even managed to capture some sun stars.  The novelty had only slightly dulled by the second day, but I was still on cloud nine. 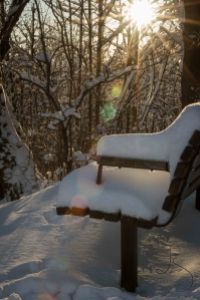 It didn’t warm up for the rest of the week, and even after a four-day trip to Yosemite (photo trip! – also another story.. check out my Instagram account if you want to see some pictures early), I came home to icy roads and lingering snow.

A week later, and the snow is still on the ground.

All told, we officially recorded 10.8″ of snow (it looked close enough to a foot in most areas near our home), and kids have had over a week off from school.  I might not be quite as free as them, but I guarantee I can give their snow day excitement a run for its money! 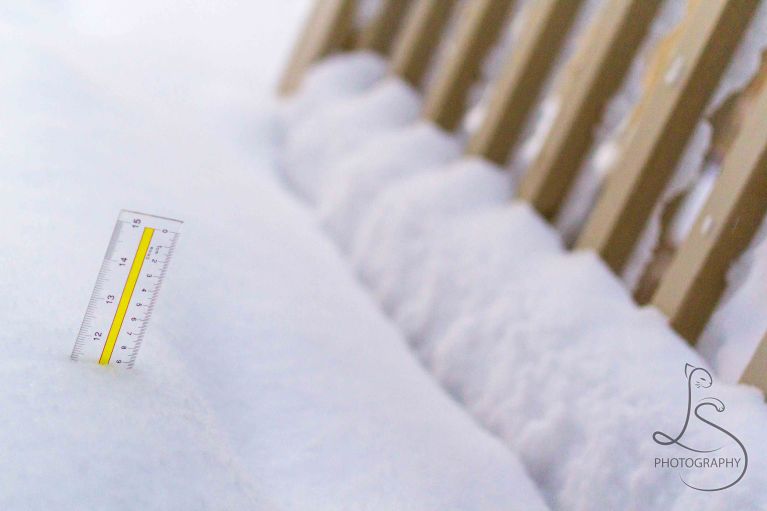