After so many months being cooped up inside, looking out forlornly at the damp gloom, spring – and its associated warmth and sunshine – can’t come soon enough.  Sure, I love to ski (when it isn’t raining), and I can appreciate a solid coastal storm, but one grows weary of the Northwest Tan eventually.  Aaron and I are members of a local Meetup group, where I can shoot with my fellow camera nerds, and we can scratch that exploring itch. But there isn’t much for us to do during the winter, unless it’s inside; lately we’ve been limited to socials and studio shoots (neither my strong suits).  Some years are better than others – in truth, our winters are typically very mild.  But this year, we had one of the wettest on record, so once we saw 60s in the forecast, we were outside! 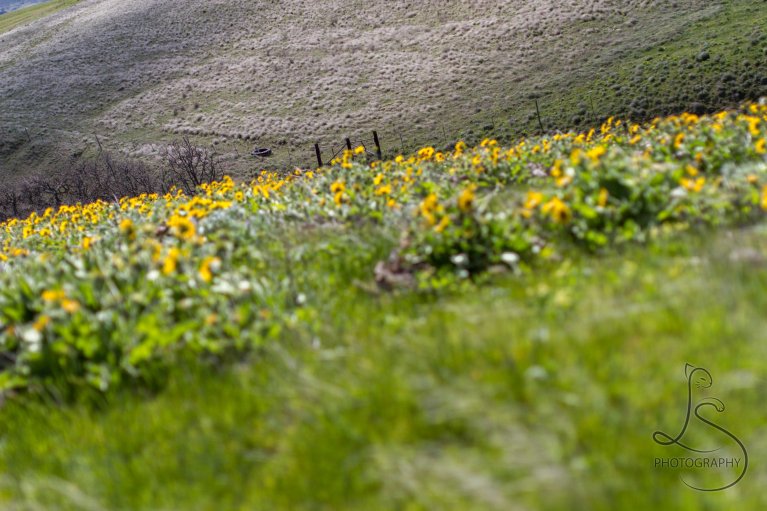 The Gorge has countless opportunities for a whole variety of shooting.  It is rife with trails, hills, waterfalls, and breathtaking vistas – something for everyone!  And with a group as diverse as we have, everyone knows a different beautiful destination.

Our inaugural outing took us to the Washington side of the Gorge, to Columbia Hills State Park, home of the Dalles Mountain Ranch and Horsethief Butte. 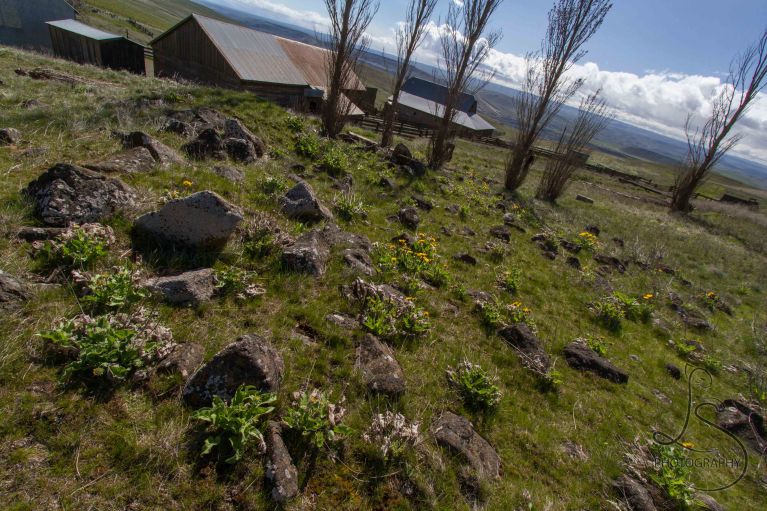 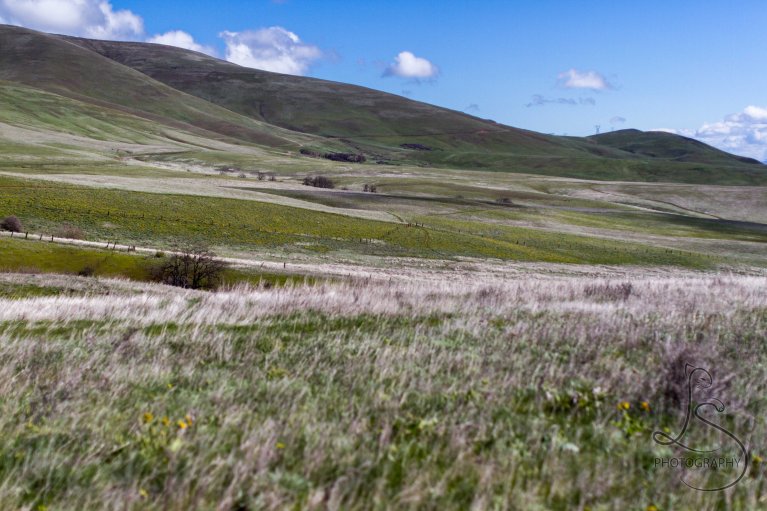 Enjoying the early-year sun, we had a very windy visit, punctuated with sporadic light sprinkles.  We spent ample time at the barns at the heart of the ranch, documenting the buildings in disrepair, the broken fences, and the rusty farm machinery, literally corroding into the ground.  It all provided varied and intriguing subjects for our photos.  The sun came and went, making some shots more difficult than others (believe it or not, photographers actually hate direct, bright sun), but I was able to catch some shade in spots and narrow my focus in others. 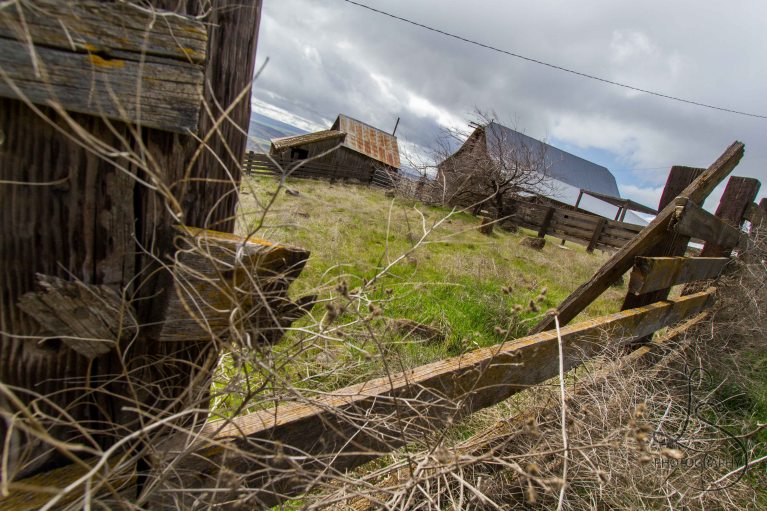 We were on a quest to locate a pile of rust once reminiscent of a car out in a field a short distance from the barns.  With a bit of searching, we found it.  There’s something that can somewhat pass as a trail.  It starts off of a parking lot past the barns and winds downhill.  We picked it up at the ranch proper, continuing down the hill, across the field, and along a barbed wire fence.  A gate at the bottom of the hill permits access to this old car, nestled in its floral bed. 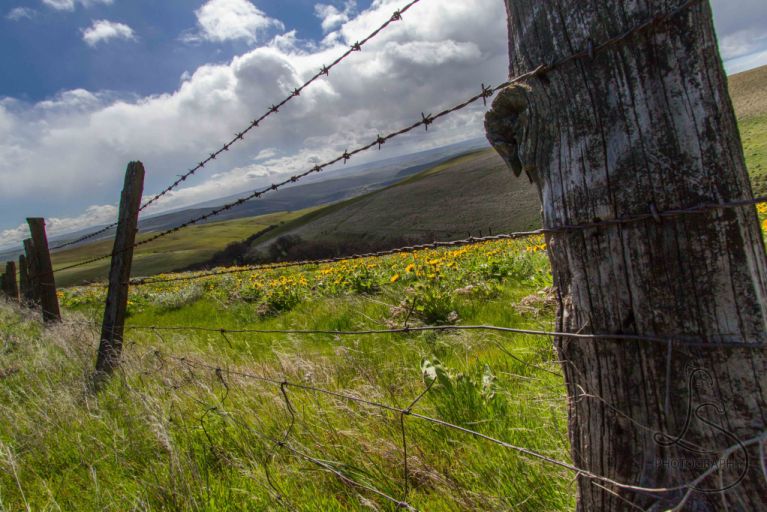 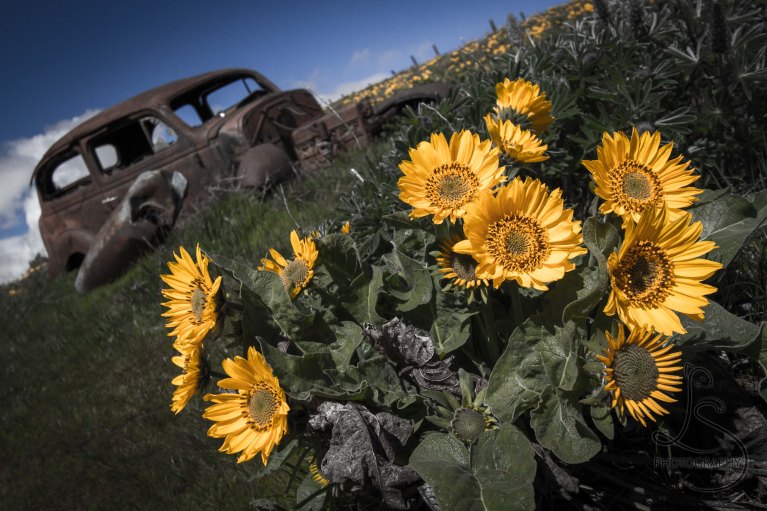 I love photography.  I love taking pictures – the excitement of capturing a single, fleeting moment, immortalizing it for future reflection.  Photographing with others is an additional treat of its own.  Sometimes, I love to just step back and witness others experience the same passion I feel firsthand every time I take hold of a camera.  Multiply this a dozen times, and you’ll begin to understand why I enjoy shooting with a group.  Some of my favorite moments wind up being the candids I snatch of others completely lost in their craft – crouched for just the right angle, laying on the ground for the perfect foreground, or even contemplating digging up a flower to achieve their ideal composition (but not doing it, of course). 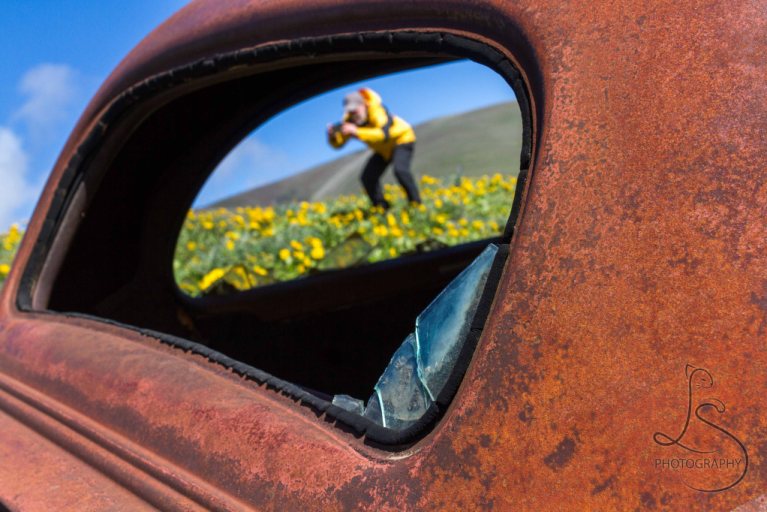 The entire gathering had a field day with this car.  It had so much character, all by itself.  Surround it with the blush of spring, and who could resist?

Once everyone had secured their desired pictures, the goofballs emerged.  Peeking through the windows, sitting in the car (on what??), posing with the car.  We all even managed to sit still long enough for a group shot before moving on to our next  adventure… 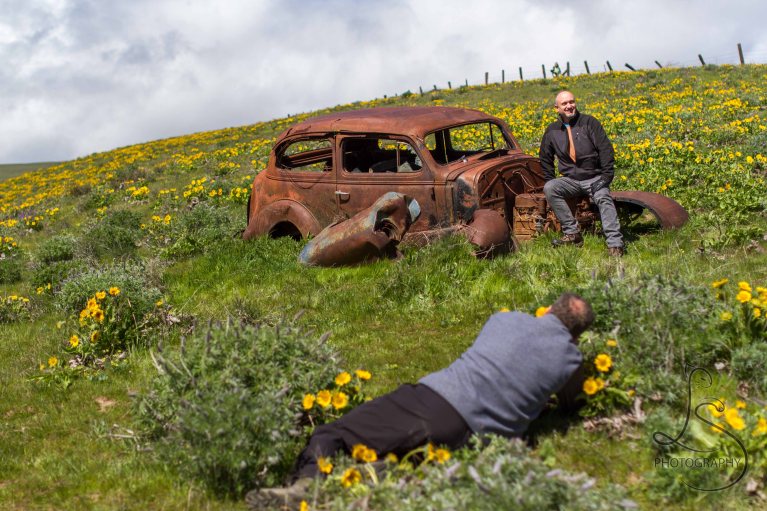 …which was Horsethief Butte. 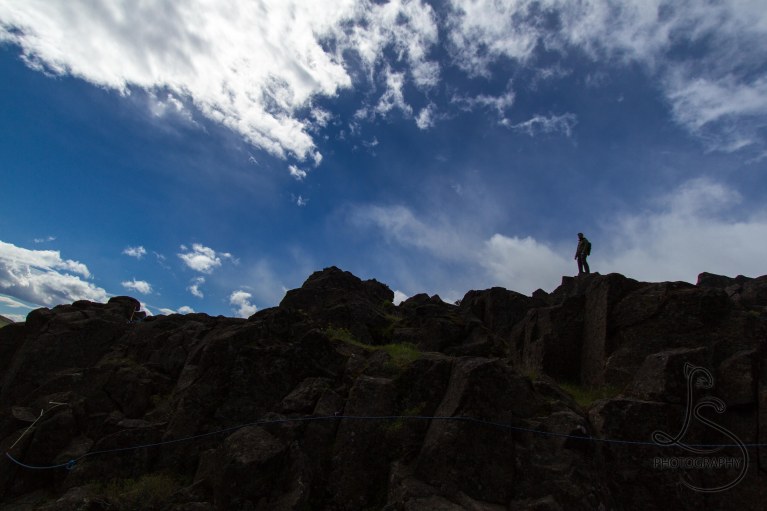 Crawling with rock climbers, it’s a fun place to scramble.  With the clouds, the colors of the rocks were vibrant, the colors of the climbers’ jackets even more so.  We were ultimately chased away by fierce winds and stronger-than-pleasant rain.  With our cameras huddled under our jackets (one even sacrificed his own shelter to protect his gear), we fled the butte… But not before a nearby overhang drew us to a few more picturesque snapshots.

We grabbed some quick dinner in Hood River before crossing back over to the Washington side to catch a waterfall or two as we made our way back to town.  Aaron and I nearly skipped this part, tired and thinking of hungry kitties, but we were in for an unexpected treat. 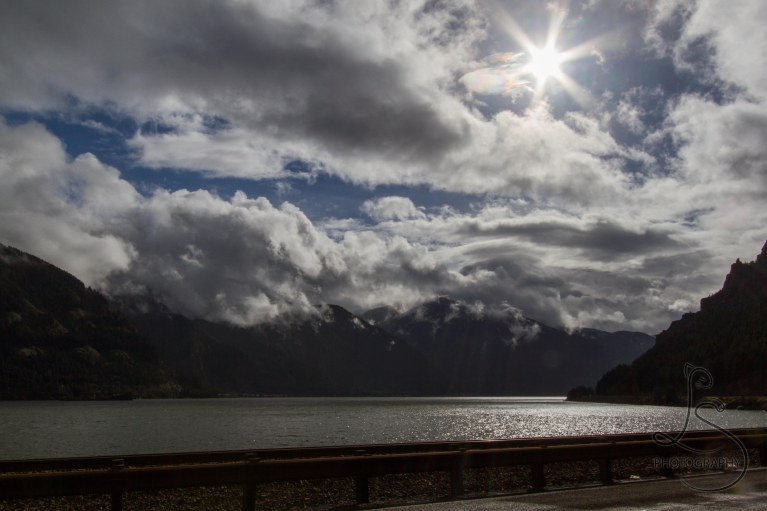 The spotty weather meant some amazing clouds were funneled down the Gorge.  The head of our caravan was looking for a specific waterfall, and all I could think was, “please stop.. These clouds are incredible!”  My wish was granted mere moments later.  However, I ignored the promised waterfall, mesmerized by what lay in the opposite direction.  Dashing across the highway and well-used railroad tracks (I don’t advocate this!  Be extremely vigilant when around tracks!), a few of us were rewarded with a close view of the river, shrouded in weeping clouds. 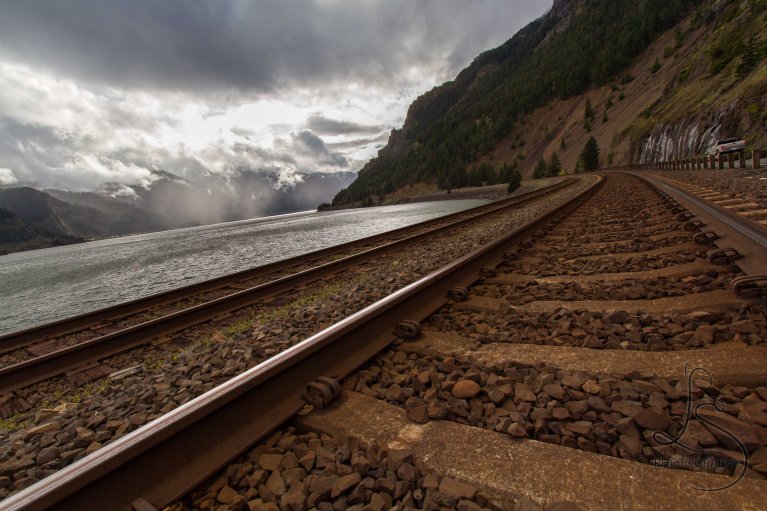 We got there just before those very clouds descended on our location; we really couldn’t have timed it better.  It was the perfect way to wrap up the day, the cherry on top.  With a fresh dose of vitamin D and a couple hundred images on my SD card, the hiking season had officially begun.