Day 11, we left the ryokan, braved the crowds, and biked to a shrine.  We rounded it off with a trip to Osaka for their famed okonomiyaki and takoyaki with a good friend.

Two days at the ryokan really went by very quickly, and we were already to our last morning.  We packed up our things and headed down to our last fancy breakfast.  I was surprised to find they weren’t expecting us; the 7am memo must have gotten lost this time.  I felt bad as they raced to put everything out, nearly tripping in their haste.

I was also surprised to see breakfast was completely different on this second morning.  Unlike the hotel, we were not presented with the same meal each day.  The spread was just as impressive as the previous, but the curiosity I was drawn to was the little fish fired at our table over a wire mesh propped on top of a candle.  We weren’t exactly sure how to eat it, so we confirmed we were expected to eat it whole.  However, when our server came back to check on us, she laughed when she found the little fish entirely gone.  What did we do wrong?

We checked out and took a train to our final residence for our stay in Japan: a privately-owned townhome.  Compared to the hospitality of the ryokan, the interaction with the owner was a bit dry, but perhaps this was because we were running a bit late; they don’t take well to tardiness, and I feared we had offended him.  No matter.  The exchange was short-lived, and we were quickly acquainted with our new accommodations and headed out on the included bikes for some shrine viewing.

We found ourselves at the bottom of the hill leading to Kiyomizu-dera Temple.  We located a bike parking lot (you can’t chain your bike up just anywhere) and wandered the adorable alley on foot.

It was quite crowded by this point.  Couples strolled in elegant kimono; rickshaws trotted down the center; shops bustled with patrons. 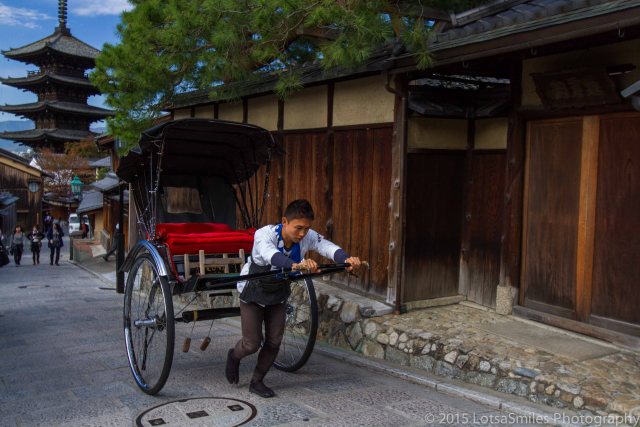 We found the iconic pagoda Aaron had been searching for, Yasaka-no-to, a stunning 5-tiered structure – the oldest pagoda in Kyoto.  It’s one of the few you can actually ascend, though we didn’t know it at the time.  Had we also planned ahead, I would have loved to rent a kimono for the day.  As it was, it was a beautiful day to people watch, though a tad bright for photography.  We even had the rare pleasure of spotting a geisha out with her client.

We also saw these little stuffed…. things.. everywhere.  I later found out these are supposed to be monkeys, there to take from you a desire you harbor that is keeping you from achieving your goals and getting your wish.

We grabbed some pork buns for lunch before discovering an entire shop dedicated to cats – I was in heaven.  As we munched, we were approached by another small group of schoolchildren, armed with their English scripts to ask similar questions: “Where are you from?”  “What is your favorite Japanese food?”  “What do you like about Japan?”  It’s an excellent way for the kids to practice their English, though I have to wonder how much of our answers they actually understood.

We continued up the hill to Kiyomizu-dera Temple, paid the admission, and joined the throngs wandering the grounds.  Parts of the temple were under construction, but that didn’t detract from the gorgeous views, including the iconic scene featured in many anime.

I felt the visit was a bit rushed, mostly because I was a little uncomfortable amidst so many people.  I would have enjoyed it more during an off-time, when we could leisurely stroll and really soak up the beauty.

While many were in kimono, I laughed at the abundance of cell phones, selfie sticks (these are everywhere in Japan), and other evidence of modern technology tucked away in the traditional garb.  It was a unique blending of old and new that I found fascinating.

As the afternoon grew later, we finally departed, and I debated purchasing a real kimono on our way back down the hill.  We collected our bikes (after figuring out the locking mechanisms), dropped them off at the townhome, and took an express JR train to Osaka.

It was highly unusual that we had to go through a retail store to get to the station, and we were further confused when we landed on the platform for Shinkansen with nary a JR line in sight.  After several requests for directions, we made it; it turned out the JR line was hiding beyond the Shinkansen.

I was excited about this part of our day, as we were going to meet up with a good friend I hadn’t seen in two years.  Natsuki was a language partner while we attended the same school in the US; I wanted to practice my meager Japanese, and she wanted to hone her English.  We were able to share Thanksgiving with her while she was in America, and she returned the favor by sharing with us the experience of takoyaki, something for which Osaka is well known.

Osaka is also known for its okonomiyaki, a culinary must I’ve had since watching Ranma, one of my very first anime.  We were early still for our meeting with Natsuki, so we tracked down some okonomiyaki to share.  I wasn’t sure what to order, and our server didn’t know much English, so we settled on something simple.

It was just as delicious as I had hoped. 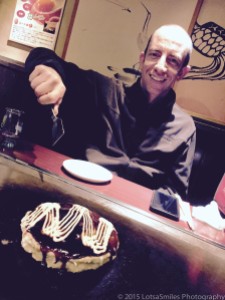 I’ve seen some restaurants that let you cook your own, but I was glad to not have that control in this case; I wouldn’t have known what to do!  Instead, our server cooked our Japanese pizza/pancake on our table.  We waited with rapt attention and grumbling stomachs until it was fully cooked, sauced, and divided.  The end product was slightly crispy, with a salty-sweet sauce that melted in our mouths.  Totally worth the trip to Osaka.

We still had time to kill before meeting Natsuki, so we wandered around town a bit, taking some pictures of a nearby river.

Finally, it was time for takoyaki (we just came to Osaka for the food, after all).  We found Natsuki and the restaurant, and I couldn’t wait for these little fried octopus balls.  This was a restaurant where we spun the balls ourselves.  The experts and anime make this part look deceivingly easy.  Batter is poured over octopus chunks in a griddle with round indentations, and you’re provided pokey sticks with which to twirl the solidifying mixture into balls.  It took me a long while to figure out that you should use this tool to scrape along the outside instead of simply poking the fragile orbs and attempting to lift. 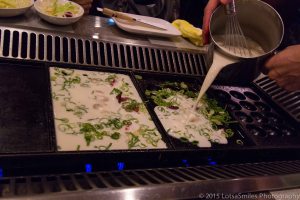 By the time I had mastered the technique, they were all pretty well cooked.  I was glad that even our Japanese native friend struggled a bit.

These tasted surprisingly similar to the okonomiyaki, though the balls had a thin, crispy exterior that quickly gave way to the slightly-batter-y, juicy center. 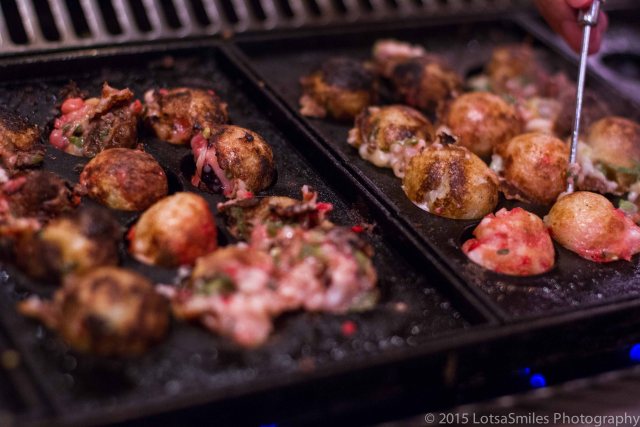 More than the food, however, it was fun to catch up with a friend.  Despite her worry, her English was quite well intact.  As with karaoke, though, I was very glad to have a Japanese native with us; it made the experience that much more enjoyable.

We also asked her about the fish from the morning’s breakfast.  After she got over the shock of someone being so mean to us as to laugh at us, she explained that generally the tails are not eaten (probably like we don’t eat shrimp tails).  We’ll keep that in mind for next time.

We bid our farewells and headed back to the station to return to Kyoto.  We stopped to listen to a few street performers.  A three-person band noticed a couple of Americans in their audience, so they insisted on singing an English song (with the help of lyrics on his cell phone).  Their rendition of “Stand By Me” was better than plenty of native English speakers’ that I’ve heard.  Sometimes I’m embarrassed by how well they know and speak English when I can barely fumble my way through the most basic Japanese.

I noticed these streets were vastly more lively than those in quiet Kyoto at this time of evening.  Osaka is like Tokyo in activity, with Kyoto’s mellow, laid-back attitude.  It was a good way to wrap up a fun evening before making our way back to the (cold) townhome. 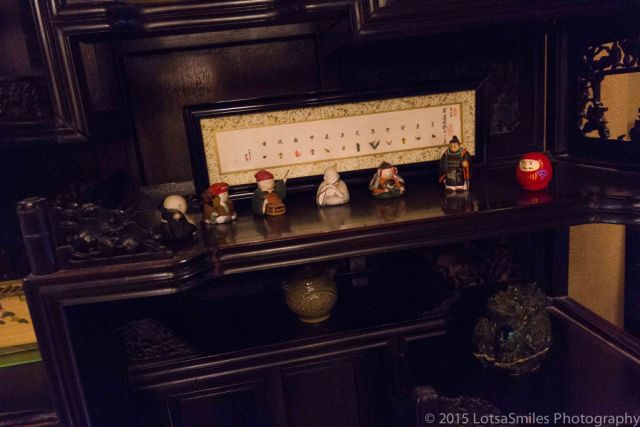 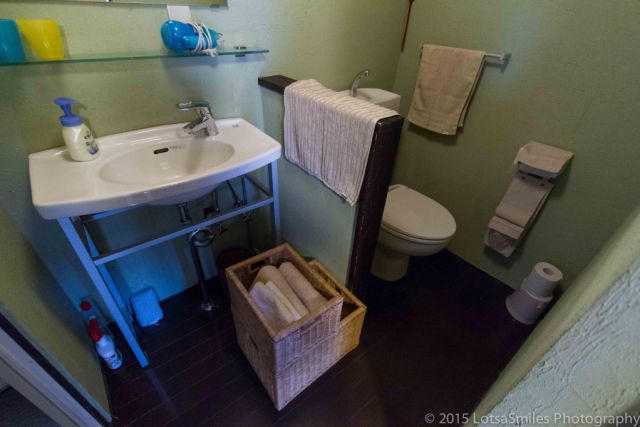 Baka gaijin moment of the day: Don’t be afraid to ask how to eat something new to you.  Expect that you still might do it wrong, and people might question you.  You’ll be forgiven, but you might become their unwitting comedic relief.